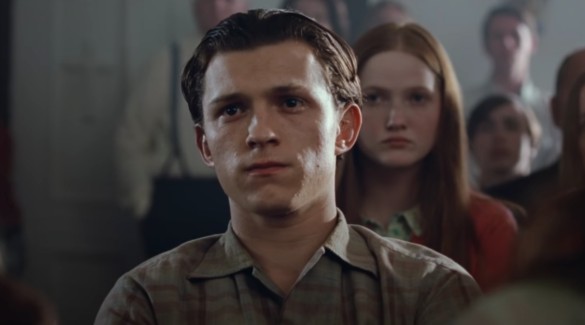 Synopsis: A young man is devoted to protecting his loved ones in a town full of corruption and sinister characters

Coming off of the acclaim for Sundance indie hit Christine, director Antonio Campos has increased his scale for his new Netflix film, The Devil All The Time. An epic Southern Gothic tale based on the book of the same name by Donald Ray Pollock, it features a sprawling ensemble including Tom Holland, Bill Skarsgård, Robert Pattinson, Riley Keough, Jason Clarke, Eliza Scanlen, and Sebastian Stan. It mainly focuses on the story of Arvin Russell (played by Holland), a young man who is forced to overcome many tragedies in his life to provide better circumstances for himself and especially his young stepsister Lenora (Scanlen). In various vignettes, the film shows the tragic backstories of what brings them together and leads to their ultimate fates.

The major theme focused on throughout the film is the hypocrisy of religion and the tragic pull it can have on the impoverished. It impacts each of the major characters in different extreme ways, but the two characters who best highlight the film’s themes are Reverend Preston Teagardin (Pattinson), a power-hungry new town preacher who takes advantage of his stature, and Roy Laferty (Harry Melling), a man who’s undying faith leads to him taking drastic actions. Each of these characters shows on opposite extremes how the characters use faith to shape their morality, but ultimately are met with similarly unfortunate circumstance. This encapsulates much of the twisting plot of the film.

The performances across the board are quite strong. The strongest performances come from Holland, Pattinson, and Keough. Each imbues complex emotions into their characters, and Holland and Keough both excel in displaying conflicted moralities that go beyond surface level. The production values are also pretty excellent, with grey-tinged lighting throughout that symbolized the mundanity of the setting and costumes and set designs that perfectly fit the period. Additionally, the harrowing score and hymns throughout depict how religion controls all aspects of life for the characters within the film.

Where the film runs into problems is its script and editing. Often, the focus on the characters gets lost due to the cutting between vignettes and timelines, which occasionally can seem haphazard. This often results in individual bits of exposition being rushed through in stilted dialogue and can leave the viewer confused. Additionally, it appears that almost all of the female characters are not afforded a complete arc, outside of Keough’s Sandy. The narrative is almost completely focused on the arcs of the male characters and what leads them to react to specific moral quandaries.

Additionally, the slow, deliberate pace of the film leads to certain scenes feeling overextended. At two hours and eighteen minutes in length, the film felt both too long and not long enough. Based on these criticisms, the film likely would have made a better miniseries than a movie. Fleshing out some of the underdeveloped arcs and expanding the vignettes would have added a lot to the story and made the narrative easier to follow.

All in all, The Devil All The Time is quite a mixed bag. With strong performances and production values across the board, a better narrative focus and tighter editing (or a broader scope and miniseries format) could have made this film an exceptional one. However, its flaws drag it down quite a bit. While it contains many themes, scenes, and aspects that are memorable, in the end, the film that is there is more disorienting than haunting.