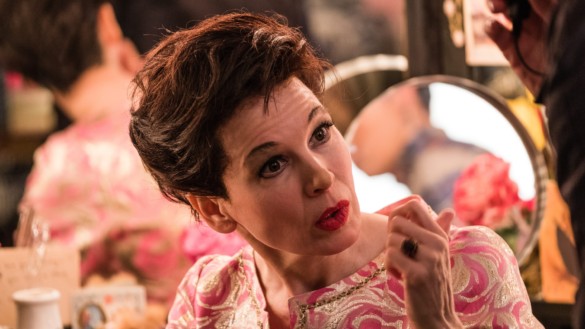 Synopsis: Legendary performer Judy Garland arrives in London in the winter of 1968 to perform a series of sold-out concerts.

There has been a lot of buzz for the newest Renee Zellweger vehicle, the biopic of iconic actress Judy Garland simply known as Judy. Since its premiere at Telluride, all who have seen the film praised Zellweger’s performance, but does the film itself warrant the hype? In some ways, yes it does. In other ways, it falls a bit short and into conventional biopic territory. But is the final product a worthy watch? That warrants further discussion.

Judy is based on the Peter Quilter play, End of the Rainbow, and was adapted by The Crown writer Tom Edge. The director, Rupert Goold, is best known as a theater and BBC television director but previously made the film True Story. It centers around the latter part of Judy Garland’s (Renee Zellweger) life. At this point, Garland’s film career was basically nonexistent, and she was relying on live musical performance to survive, constantly moving and without a set home. As a result, her ex-husband Sid Luft (Rufus Sewell) takes custody of their children Lorna and Joey. Additionally, she is clearly struggling with substance abuse, the origins of which are depicted in flashbacks to her younger age, where Judy (Darci Shaw) was victimized by Louis B. Mayer (Richard Cordery) and overworked as a child actress on the set of The Wizard of Oz.

Judy is forced to turn to a series of London shows in order to make enough money to get her life back in order. Once she arrives, she is introduced to Bernard Delfont (Michael Gambon), the theater owner, and Rosalyn Wilder (Jessie Buckley), her personal handler for the concert series. Judy is very difficult to work with and has issues showing up on time and rehearsing, but when she hits the stage, she sings in vintage form, which brings much needed attention to her. As she is going through this, her eventual fifth husband, Mickey Deans (Finn Wittrock), comes to London to support her endeavors and propose new business ventures. All throughout, Judy struggles to maintain her composure as she deals with homesickness, missing her children, and the continued substance abuse. The film eventually reaches its natural conclusion, and if you know Judy Garland’s story, the blanks can be filled in.

The main draw for the film is Renee Zellweger’s performance. She is as good as advertised, both emotionally powerful and completely convincing as an icon who has fallen from grace. She is the heart and soul of the film, and without her, it would not work as well as it does. That said, everything else about the film is competent to good. The rest of the ensemble, notably Jessie Buckley and Finn Wittrock, do the best that they can with the material they are given, but there is little to no character development outside of Judy herself. The script is at its best when depicting Judy’s struggles, while the historical notes such as her relationship with Mickey Deans are a bit contrived. Additionally, the film’s aesthetic is period appropriate, but nothing outside of the costumes and makeup truly stand out as noteworthy. Overall, Judy is a film that should be commended for Zellweger’s powerhouse performance, but otherwise it is a respectably made but completely conventional biopic.

Hear our podcast review on Episode 345: