Movie Review: ‘I’m Thinking of Ending Things’ is a creative meditation on feeling like a complete fraud 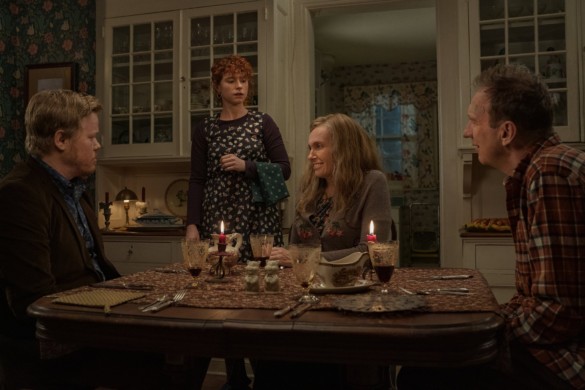 Synopsis: Full of misgivings, a young woman travels with her new boyfriend to his parents’ secluded farm. Upon arriving, she comes to question everything she thought she knew about him, and herself.

Reviewing I’m Thinking of Ending Things after one viewing is unfair. It is unfair to the film. It is unfair to the reviewer. Charlie Kaufman has always been a tough nut to crack, especially when he sits in the director’s chair, but the freedom of a Netflix deal and whatever seems to be troubling Kaufman these days brought about his most elusive film, to date. However, a piece of art being elusive does not restrict it from being worthwhile. I’m Thinking of Ending Things is a, in typical Kaufman fashion, a tragicomedy drenched in self-doubt, loaded with self-loathing, and sprinkled with self-importance. Whether or not the film is knowingly, playfully self-important or oblivious to its pretense is sure to be touched upon in nearly every review of the film– for the record, I believe that Charlie Kaufman was born with his tongue firmly planted to his cheek and has never bothered to move it. He knows he’s smart, but he also makes movies that show how little that matters. Whether tackling ideas of death, aging, media, relationships, or so much more, the film is always engaging, even when you feel mentally defeated. It’s a film that demands a second watch, but watching it will never feel like a chore. It works both as a dreamlike journey and as a rigorous mental exercise.

I’m Thinking of Ending Things is the story of a young woman (referred to in the marketing material as The Young Woman), played by Jesse Buckley, on her way to visit her new boyfriend’s parents for the first time. The problem is, as the title implies, she has a distinct feeling that their relationship won’t last. Her inner-thoughts are communicated through narration frequently, allowing Kaufman to flex his writing muscles. The prose is biting, thoughtful, and hilarious. Her boyfriend, Jake (Jesse Plemons), treats his girlfriend well, but his insecurity and short temper flare up regularly. The film starts with a car ride that takes up the better part of 20 minutes. During the ride, the eeriness of suburbia and classical Americana (well-trodden territory in the abstract works of directors like David Lynch, Tim Burton, and the Coen Brothers, among numerous others) becomes apparent. An intense snowstorm swirls around them as the soundtrack for Oklahoma plays on the radio.

When the couple arrives at the farmhouse, things feel… off. It is as if our characters stepped into The Matrix, surrounded by several glitches that disconnect them from reality. Jake’s parents, played by David Thewlis and Toni Collette, are socially inept. His father seems incapable of looking in people’s eyes until he suddenly decides to look too directly and too aggressively in people’s eyes. His mother is gunning for the world record for most awkward laughs at a single dinner. The performances here by Thewlis and Collette are remarkable, especially when you look back at all the things they end up being asked to do in a compressed amount of time, the details of which would spoil some of the film’s funniest and most heartbreaking bits. The portion at the farmhouse is the most accessible and mainstream part of the film, which is remarkable considering the abstract leaps and bold visual choices during that portion of the film. With the film’s most literal scenes out of the way, the weirdness turns up a notch when the couple heads home in an even stronger storm. Trying to explain the plot after that would read like a Mad Lib written by a man going through some sort of emotional crisis.

The dialogue sequences in the car are cinematic thanks to creative camerawork from cinematographer Łukasz Żal, who further establishes himself as one of the best cinematographers on Earth after getting an Academy Award nomination for 2018’s Cold War. In a film with multiple long stretches of two people simply talking, Żal’s role is crucial. Buckley and Plemons never seem to be seen the same way twice. This is obviously impossible, considering how much time we spend in the vehicle. Still, the illusion is played effectively thanks to angles that all feel unique, excellent coverage, and crisp editing. I’m Thinking of Ending Things also gets a lot of mileage out of stellar sound design. Whether used for comedic effect or to accentuate Kaufman’s unique sense of dread with the steady hammering of windshield wipers, audio is a valuable weapon in this film’s arsenal.

While all of the technical elements are top-notch, at the end of the day, a Charlie Kaufman film is about the ideas that Kaufman’s bringing to the table, and with I’m Thinking of Ending Things, he’s brought a family buffet that cannot possibly be consumed in one sitting. The metatextual device that weaves throughout the film is the constant referencing of other creative work. Jake’s childhood bedroom is littered with old VHS tapes, weighty poetry collections, and the writings of the great critic, Pauline Kael (between this film and his recent novel, Antkind, Kaufman seems to be on a film critic kick.). Often, the work of others is directly quoted. Characters seem to be possessed by other creatives as they spit out the exact words written or spoken by someone in the past. The film copies some of cinema’s most famous shots. Kaufman posits that ripping off other people can, in fact, lift the original work to a greater plane, if the original creator has been established. However, he also believes that, in many cases, the initial work will be credited to the thief. Against an artist’s will, their work can be taken away from them. This idea is more a battle Kaufman seems to be fighting than a lecture he’s yelling at the audience, but the through-line is a fascinating one. Many audience members will recognize homages to films like Fargo, but there are so many others that many people (including some of the best film critics in the world) will miss and falsely associate as original to I’m Thinking of Ending Things.

It’s also imbued with an incredible sense of dread and sadness. Kaufman’s writing is always full of self-doubt and a feeling of loneliness. Still, when he also directs his work, it becomes more akin to horror films than the more accessible works of directors who have adapted his writing, like Spike Jonze and Michel Gondry. I’m Thinking of Ending Things isn’t quite as singularly-focused on death as his fantastic film, Synecdoche, New York, but it certainly has an eye on the subject. Jake sees death as a natural implication of life (the farm boy in him) and a gross inconvenience (the city boy in him). There is a beauty in the gentleness of the aged, but also something off-putting about their reliance on others. Death is handled almost like a hand-off by those responsible for someone on Earth to whatever comes next. There are no tearful goodbyes or funerals, just people leaving rooms or supernatural entities acting as guides down a hallway. The only things the characters have when they approach death are their memories. They pass through us all for our entire lives, the wind pushing towards the sails of existence. Inner-lives can feel wholly separated from the public lives these people lead. Identity is an abstraction, built by self-assuredness and stability, neither of which Buckley’s character has. Her reality crumbles alongside her sense of direction and confidence in her place in the universe. It is another successful assault on human emotion from Charlie Kaufman.

That is not to say that I’m Thinking of Ending Things won’t frustrate. The car scenes can feel drawn out, and sometimes the barrage of ideas and abstract tools used can feel a bit too untethered. That said, it is an incredibly special film that has the power to overwhelm, mentally, and emotionally. This should absolutely not be the first Charlie Kaufman film anyone watches, but fans of his work will find it incredibly rewarding. Rarely does a film strike a chord this powerful. The film covers an incredible breadth of ideas and digs into incredible emotional depths. It is one of the greatest films released by Netflix and one of the best films that 2020 has to offer. It is very fitting that a movie that presents human thought as a virus consuming our reality is, perhaps, the peak of COVID-19 cinema.