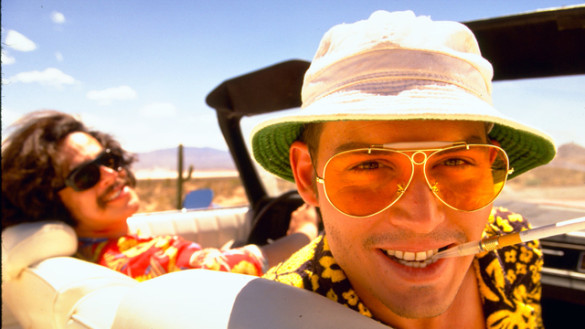 Johnny Depp has been one of the most frequently discussed actors of our time. Not just because he’s handsome, but because he has managed to star in both award-winning films, and box office flops. His consistency is zero to none, and he’s been caught in Tim Burton’s web of destruction way too often.

With the critically acclaimed Black Mass recently released, the swarms of film goers are whispering that perhaps the award-winning Depp is finally back after his weird retreat into irrelevance. Maybe, Depp has finally gone back to the crazy, dangerous, and violent roles he’s best in. The movie is oddly Goodfellas-ish, and that is always a plus.

In honor of Depp finally coming to his film senses, I’m offering up the ten best films Depp has ever starred in. Here’s to hoping the trend continues down the road.

Wallace Bryton, self-centered and crude podcaster, goes to Manitoba to interview a mysterious seafarer named Howard Howe. When he goes missing, his best friend, girlfriend, and an ex-detective go in the search for him, only to find his fate has been “seal-ed”.

Though probably considered a very minor part of the actual movie, Depp’s character, ex-detective Guy Lapointe, is easily the funniest he’s ever been in a movie. His accent is not quite right, he’s barely recognizable, and he seems either drunk or listless, but he’s amazing. There are numerous parts of this movie that I enjoyed, but his part made me laugh the hardest.

Gilbert is forced to take care of his handicapped brother Arnie and his morbidly obese mother, which creates complications when he finds love.

The film is award-winning for a reason. Depp plays a frustrated Gilbert, who after years of caring for everyone but himself, as become jaded and hard to reach. Only the love of his brother and sense of duty keep him going. Even his job is futureless. Despite the hopelessness that the situation creates, Depp still manages to bring hope and faith in humanity and love to the screen. A real treat to watch.

After an explosion in space and subsequent period of no radio connection for two minutes, two astronauts return home to their wives. It becomes immediately clear that the men are no longer themselves.

Johnny is always a catch in an action film, but he really shines when he’s allowed to express himself through horror. In the film, as Commander Spencer Armacost, he comes off as creepy, cold, calculated, and a little…um…out of this world. You can’t really go wrong with a Charlize Theron movie.

Directed by the infamous Roman Polanski, and in his typical style, the film follows a rare book dealer seeking out the last two copies of a demon text. The dealer gets drawn into a conspiracy with supernatural overtones, making it clear he’s not just dealing with a normal book.

On the good side of a horror film, Depp plays Dean Corso perfectly. He’s a quiet book-worm who is used to getting his way by money, and when he gets close to what he wants, he becomes both incredulous and motivated. He presents a complex character. Definitely worth a watch.

The film was a highly anticipated look at the mission of the Feds trying to take down notorious American gangsters John Dillinger, Baby Face Nelson and Pretty Boy Floyd during a booming crime wave in the 1930s.

Playing the infamous John Dillinger, Depp exuded the dangerous, rebellious, uncaring, yet deep in love Dillinger. He gave the role complexity and intelligence, adding to the historical significance and accuracy of the film. He was the perfect cast for such a controversial American figure.

Based on the short story by Stephen King, “Secret Window, Secret Garden”, the film follows the story of recently divorced Mort Rainey, who has recently been accused of plagiarism by a strange man, who starts haunting him for revenge.

This is one of my favorite King adaptations to date. Not only did the movie do the short justice, but the plot, character development and filmmaking quality was top-notch. Depp played the perfect protagonist (antagonist?) that finds shocking revelations about himself. He’s lazy, messy, self-loathing, and fuming with anger at his ex-wife. It will keep you guessing to the last minute, and every time I watch the movie, I feel like he’s also figuring everything out for the first time.

One of the few Burton films I can watch (they’re mostly all from the early 90s), the movie shares the story of Edward, who being born with scissors for hands, is welcomed into a community near his home where he’d been waiting in isolation.

Depp was insanely creepy and sweet at the same time. You felt repulsion and sorrow for Edward. The bullying, misunderstanding, and longing that Edward felt was all perfectly portrayed by Depp. He would go on to star in a slew of horrible Burton films, but this one remains intact.

We all know the gist: a man, who after being burned alive by vengeful parents, turns into a dead serial killer who does his bidding in dreams.

This is Johnny’s first movie. He plays Glen Lantz; a teenager who meets a very untimely, and very gruesome, end. He may not get an Oscar for this performance, but the horror movie and its resulting franchise have gone down in horror history. He’s iconic to the horror community.

This movie is based on a novel by the same name, written by Hunter S. Thompson, laced with autobiographical undertones and gonzo journalism. The film chronicles the journey of Raoul Duke and Dr. Gonzo. as they take a trip across country in a drug-induced haze, trying to reach for the American dream.

This could easily be one of Depp’s most iconic and memorable roles. The viewer feels like they were slipped a bad dose while they watch two hours worth of weird events, nonsensical arguments, and hilarious public outbursts. Depp brings his eclectic style to this role, and it only does it justice. What was essentially a box office flop, soon turned into a cult classic, and that’s partly in thanks to Depp’s portrayal of the strange man himself, Hunter S. Thompson.

The title of the movie says it all; the true tale of George Jung, the man who established the American cocaine market in the 1970s.

Depp plays the role of Jung, which could arguably be the closest thing to his role as Whitey Bulgar. He’s a kid looking for a dream, who wants to stay in California forever. What he comes across is the gritty and unforgiving world of drug smuggling, addiction, and love lost. Depp plays his best role in his career in this film. He’s conflicted, obsessed, loving, melancholy, power-hungry, and intelligent. He steals the screen, and the world loved him for it.