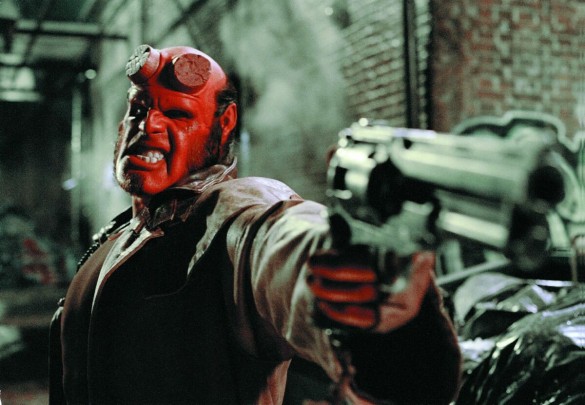 DIRECTION
When you think about all-time best comic book films, The Dark Knight, The Avengers, Spider-Man 2 and X2 are the ones that usually come to mind. But what about Guillermo del Toro’s Hellboy? While the story and characters are universally loved like the ones previously mentioned, Hellboy still deserves to be in that mix. What del Toro was able to do with a nearly impossible, unbelievable character is pretty remarkable – and instead of focusing on action (there isn’t much) or CGI (it’s mostly practical effects/makeup), story and character is exactly what he chose to drive the film and it’s all the better for it. del Toro’s camerwork, editing and pacing are top-notch, the story is fun and engaging and the characters are relatable and bring a lot of human characteristics into the fold – and that’s why Hellboy is one of the better comic book films ever made.

SCRIPT
With a bizarre premise and characters, the story for Hellboy could’ve ended up being a little “out there” for most people, considering it deals with demons, a fish guy and alternate timelines where the President has a paranormal advisor and Hitler doesn’t die until 1958. But with del Toro writing, that’s far from the case, as he focuses more on character moments and making the characters likable and relatable instead of mind-numbing action, which is very atypical for the genre. The best moments in the film are the sequences where we actually get to know Hellboy and see just how human and relatable he really is. For example, there’s a sequence where Hellboy is spying on his love interest who is out with another man and Hellboy is just worrying and doubting about everything because he loves her. And that same sequence, he gets to have a conversation with a kid about love, life and girls; it’s those kinds of scenes that draws the viewer in and make you actually care about the character and they were done extremely well. Speaking of the love interest, that’s a major part of the story as Hellboy is crazy for Liz Sherman, who is MIA toward the beginning of the film before playing a bigger role later on. And that whole storyline line is executed really well and adds a lot to the film. Overall, del Toro couldn’t have crafted a better story to showcase Hellboy and Co.

PERFORMANCES
The performances in Hellboy are surprisingly good given how bizarre and far-fetched the characters are. Ron Perlman plays the title character, the 7-foot, red, wise-cracking devil himself – and what he’s able to do with the character is pretty incredible. He takes what appears to be a pretty impossible character to play and makes him come to life, makes him likable and makes him “human.” The humanistic qualities (i.e. doubt, love, emotion) that he’s able to bring to the character makes him very relatable. While Perlman is the standout, all the other actors do fine work, most notably Selma Blair as Hellboy’s love interest and Rupert Evans as FBI Agent John Myers.

SCORE
Marco Beltrami’s score for Hellboy serves its purpose: adding to the dark and twisted “fantasy” world that this character is a part of. The score is very atmospheric, perfectly fitting with whatever is going on, whether it’s an emotional scene or an intense action sequence. The standout track is the theme that plays over the opening and closing credits; it’s really the only track that is fun to listen to outside of the film.