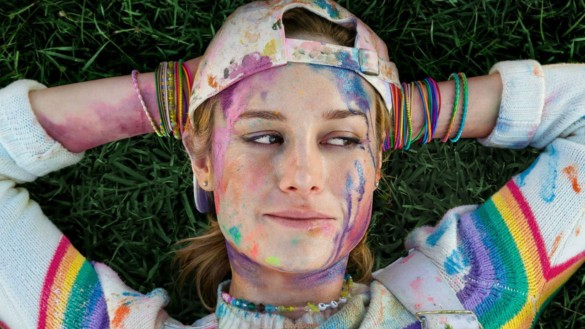 Synopsis: A woman named Kit receives a mysterious invitation that would fulfill her childhood dreams.

Movies have long been an art form focused on the power of dreams. In Brie Larson’s directorial debut Unicorn Store – recently released on Netflix – dreams propel the narrative, but they are not felt deeply enough to make the impact for which the film reaches. That’s not to say this is a sub-par film. I enjoyed it quite a bit, and Larson shows clear directorial talent. But from weakly-written characters to an ending that doesn’t fully stick, this film holds itself back from being what it could be.

The story centers on Kit (Larson), who we learn in the film’s opening scene is a failed artist who now lives at home with her parents Gene (Bradley Whitford) and Gladys (Joan Cusack). Kit’s art was centered on unicorns and glitter, a fascination born during her adolescent days. She still harbors those artistic dreams, but she is now faced with becoming an adult and the realities that come with that transition. She takes a temp job at a PR firm led by the off-putting Gary (Hamish Linklater). At the same time, she finds that her childhood dreams may not be completely lost and they may not even, in fact, be dreams.

Let’s start with the good. This film is riddled with strong acting talent, and the actors prop up the characters as they are written. Larson, who the Academy Award for Best Actress for her performance in Room, gives a strong leading turn as Kit. I feel compelled to include the reminder of her acting acclaim since clearly there are some who think she is not qualified. Whitford (a personal favorite of mine since his West Wing days), the prolific Samuel L. Jackson and Linklater all give strong performance. However, the performance of the film comes from Cusack in a scene-stealing turn as Kit’s mother, Gladys. She is hilarious, using her famous comedic timing to perfect effect. The scenes that she is in are some of the best in the entire film.

As a writer who also works in the PR department at a marketing agency, I was able to resonate with a lot in this film. I particularly like the notion that childhood dreams are not trivial matters to be tossed aside in adulthood but rather, those dreams might just lead us into the very success we seek as we grow older.

However, I think the film struggles to make Kit’s dreams any more than fodder for the film’s plot. I never really felt invested in her chase, and there wasn’t enough emotional resonance for the film to work 100%.

I also think that the relationship between Kit and Virgil (Mamoudou Athie) needed to be more powerful. I didn’t feel the chemistry there that absolutely must be there for the film’s payoff to work. Again, I think the blame there rests more on the writing than the acting, as I thought both Larson and Athie give fine performances.

I enjoyed the first half of this film much more than the ending. I think that’s because – due to some of the ways I personally resonate with the story – I felt like the film was setting itself up well. It fails to stick the landing, though. That doesn’t make me totally forget that the film had a strong setup, but it did leave a sour taste.

There’s a lot to like about this film. Visually, Kit’s artistic bent opens up a bevy of colorful visual choices. The acting is strong across the board. It is a fun story that is surely more interesting than much of the other content on Netflix. And it’s always fascinating to see a strong actress or actor take the plunge into directing. For all those reasons, Unicorn Store is a good film. Just keep your expectations in check going in, as for all its strengths, its weaknesses ultimately hold it back.