Movie Review: To All the Boys I’ve Loved Before is more than just a teen comedy 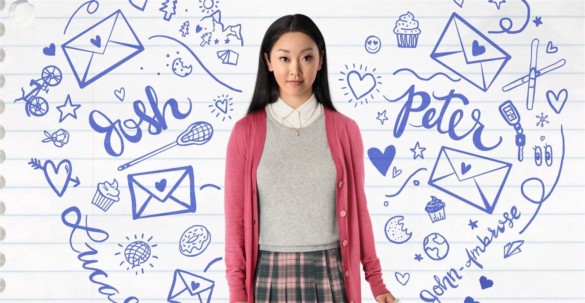 Synopsis: A teenage girl’s secret love letters are exposed and wreak havoc on her love life.

No matter how hard we try as moviegoers, I think it’s impossible to keep from sizing up a movie before you see it. Whether it’s from a trailer, a poster, or simply word-of-mouth, I think we all come in with preconceived notions when we go to watch a film for the first time. That’s why I enjoy when a movie understands this, and tries to keep us guessing. I think Netflix’s new film To All the Boys I’ve Loved Before does exactly that.

Lana Condor plays lead character, Lara Jean. She is in high school, and she is very close to her two sisters – the younger Kitty (Anna Cathcart) and the older Margot (Janel Parrish). Margot is about to head off to college in Scotland. Before she leaves, she breaks up with her boyfriend Josh (Israel Broussard) who also happens to be the family’s neighbor. Josh and Lara Jean were friends even before he began dating her sister, so the new development throws a wrench into their relationship as well. But Lara Jean is about to (accidentally) throw an even bigger wrench into things.

The film does a wonderful job of setting up Lara Jean’s character. Like so many high school students, she is struggling to find her voice. She feels like an outsider, something her quiet, innocent nature exacerbates in the competitive nature of the high school hallways. She also loves to write, and it is there where she pours out her heart and soul. Both have been injured by heartbreak, romantic and familial. You see, Lara Jean’s mother is not in the picture.

One pet peeve I have with movies is the constant need to tell us everything about our main character. I think characters should be allowed to have lives outside of what we see on the screen. If we don’t know everything about them, they feel more fully-realized. This film does just that with the storyline surrounding Lara Jean’s mother. At first, we aren’t really sure what happened. We may even assume that her father (played by John Corbett) and mother divorced, or that she simply left. But, as the film progresses, it is clear that Lara Jean’s mother has died. But we never really learn what happened, only the effects it has had on the family left behind. You see, it was their mother who told Margot that she shouldn’t go to college with a boyfriend, and that’s what pushed her to break up with Josh. And Lara Jean keeps her letters in the hatbox her mother gave her, the place where she pours out her heart and soul.

These letters are extremely personal to Lara Jean. They are written and addressed to the five boys she’s ever had a crush on. One of them happens to be Josh, something she would never dare tell Josh or Margot. Another is Peter (Noah Centineo), who is dating Lara Jean’s former best friend, Gen (Emilija Baranac) at the time the movie begins.

After Margot leaves for college, Kitty realizes that Lara Jean is depressed. And so, without Lara Jean’s knowledge, she sends out each letter. The boys, thinking the letters to be the outpouring of Lara Jean’s current feelings for them, begin coming up to her. She is mortified, but an opportunity arises from the initial embarrassment. Even though her feelings for Josh are real, she certainly cannot let him or Margot find out. But, at the same time that the letters are released, Peter and Gen break up. He wants to win her back, and Lara Jean wants to keep part of her secret still secret. So they devise a plan to fake a dating relationship together, and the foundation for the film’s plot is set.

Now, even that initial plot summary may sound like one thing to you. But if you think this is your average teen comedy, think again. First of all, there are technical components here that you probably aren’t used to seeing from a film like this. The cinematography by Michael Fimognari bears mentioning here at the outset. He has an eye for striking visual setups in the high school hallways and adjoining athletic fields. One shot, for instance, of Lara Jean and Peter standing in a doorway each in their own separate “box” is a fantastic example of how the film uses visual cues to support its narrative. The camerawork here is impressive as well. There are even a few Scorsesian touches of overhead shots and active camera movement that take the film to another level.

Also, one must mention the performance by Condor. Her comedic timing is perfect, but more than that, she really embodies this character who is coming into her own and starting to find her voice. As the film begins, Lara Jean never really speaks up for herself. Her only outlet for her own feelings are these letters, and those aren’t even released on her terms. But, as the film progresses, she does begin to speak on her own terms, and the transformation is embodied wonderfully by Condor.

My main gripe with this film is with the script and its use of exposition. Especially in the beginning of the film, so much of the plot is told to us by Lara Jean through voice-over. Now, this strategy can work beautifully if there is a reason given to us later on for Lara Jean to be telling us all these things. This film had a unique opportunity to do just that. For instance, it could have had Lara Jean writing letters to her mother later on in the film telling her about everything that had happened. But nothing of the sort occurs, and we are simply left with being spoon-fed many important plot points. Especially in the beginning when Lara Jean is more quiet and reserved, there is no reason to think her character would do such a thing. It certainly pulled me out of the film a bit, but not to the point where I was unable to appreciate what the film had to offer the rest of the way.

I won’t spoil the rest of the plot, except to reiterate that this is a film that keeps you on your toes. For all the script’s overuse of exposition, it really does a nice job of setting us up to think one thing then taking a turn to keep us guessing. The performances are incredibly charming, especially Condor in the lead role. This film is available for streaming now on Netflix, and if you’re looking for a teen comedy that is more than just a teen comedy, don’t hesitate to pick this one.