Movie Review: With its uniquely rare group of talent, ‘The Irishman’ more than lives up to its lofty buzz 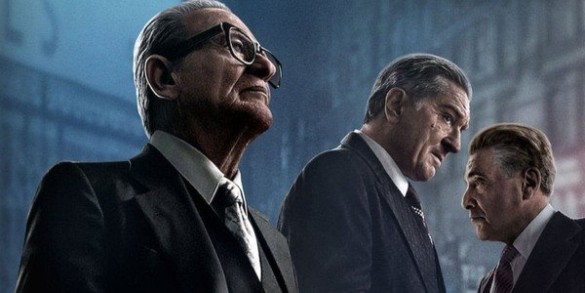 Synopsis: A mob hitman recalls his possible involvement with the slaying of Jimmy Hoffa.

You’ll often hear the refrain that some movies simply must be seen in a theater. I tend to agree with this sentiment though, after watching The Irishman in a theater, I think there a differing reasons as to why that sentiment may be true.

My wife and I drove almost two hours to see Martin Scorsese’s new film at a Landmark Theater in Chicago. We walked in just before the previews began to play, and the theater was packed. Minutes later, we saw the Netflix logo flash across the screen. That was a first for me, but what came next was an even better “first” – my first time seeing a Martin Scorsese film in a theater during its original theatrical run.

Scorsese is known as one of the great directors, and for good reason. His incredible career has given us classic after classic, and he has been arguably the greatest ambassador for cinema, film restoration, and the theatrical experience the world over. With The Irishman, he returns to a genre for which he is particularly well-known – the gangster film.

Scorsese grew up around gangsters in New York’s Little Italy neighborhood. Those memories had great effect on films like Goodfellas and Casino. While his youthful experiences surely find their way into this film as well, The Irishman is a creation of the elder Scorsese – a fact that only becomes clearer as the film progresses.

If I’ve taken my time with the intro to this review, that’s because Scorsese’s film takes its time to set up context, theme, and feeling. This is a 3 hour and 28 minute film, and Scorsese uses every second to his advantage.

The film follows the life of Frank Sheeran (Robert DeNiro), who was a mob hitman. However, the film begins in a place you wouldn’t normally associate with a mob hitman – a nursing home. Most mob hitmen don’t make it to a nursing home, and therein lies a nugget of one of the themes Scorsese focuses on throughout the film. Sheeran recalls his life of crime, and those memories take us back into the story with him.

Sheeran begins as a lowly truck driver, but he quickly finds his way into the employ of Russell Bufalino (Joe Pesci), one of the most powerful mob bosses of his day. As an aside, for this movie fan seeing Joe Pesci back on the big screen was a unique joy. He is fantastic in this film, as is the entire cast.

But the film goes quite a while without introducing us to its most famous character. That’s because Sheeran has to prove himself as being a man who will follow through on what is asked of him before he is called upon to be the personal bodyguard for the most powerful union leader who ever lived – Jimmy Hoffa (Al Pacino).

Here I must stop and praise this cast. The headline is that you get to see DeNiro, Pacino, Pesci, and Harvey Keitel (who plays another mob boss, Angelo Bruno) together in the same film. However, the supporting cast of Jesse Plemons, Anna Paquin, Bobby Cannavale, and Ray Ramano all acquit themselves very nicely. But this film is mainly carried by its triumvirate of acting royalty. Throughout much of the film, it is DeNiro, Pacino, and Pesci who bring this story to life. It’s an incredible sight to see.

Yes, this story has some of the same genre storytelling tropes of other gangster films – starting from the bottom, a meteoric rise to power, then the aftermath of that power. But where this film differs from the gangster films that came before it is that it comes to that story from a place of old-age reflection and a ponderous nature. To achieve this, Scorsese utilizes key actors in old age themselves (Pesci came out of retirement to film it). However, the film also requires flashback scenes to various moments in each man’s life. This is where Netflix came in.

Scorsese knew that he wanted to make this film a certain way. That meant using older actors and having them digitally de-aged for the flashback scenes rather than simply having younger actors play those scenes. This process is extremely expensive, and Netflix was the only studio willing to pay for it.

On the de-aging technique, I was quite skeptical going in. I kept thinking about how, had this technology been available in the 70s, we wouldn’t have gotten DeNiro in his unforgettable role as young Vito in The Godfather Part II. I still wonder what young actors might have been able to take on the roles in this film, but I must also give credit where it is due. Scorsese and his team did an incredible job with the de-aging. I was expecting it to be awkward, but once you settle into the way the film uses this technique, it just becomes part of the film.

On the technical side, the person who deserves the most credit, in my opinion, is Thelma Schoonmaker – the editor with whom Scorsese has worked for years. Though the film’s runtime is long, it never feels that way. Moments that need to breathe are allowed to breathe, which is a refreshing change of pace from so many films that choose to assault the senses with quick cuts. If the story calls for that technique, so be it. But this film certainly calls for a more thoughtful approach, and Schoonmaker knocks it out of the park.

I don’t think it constitutes a spoiler to say that Jimmy Hoffa doesn’t make it through the whole film. His death is one of the most notorious unsolved cases in American history. I Heard You Paint Houses – the book by Charles Brandt from which this film is adapted – gives its own version of how Jimmy Hoffa died. It is that notion of death that hangs over this entire film.

But for the scenes in which Hoffa is alive, we get a part that seems to have been made specifically for Pacino. Here he gets a larger-than-life character to embody. Some have accused Pacino of being an over-actor in his later years, but I completely disagree. His acting style has its own rhythm, and it fits perfectly here.

Pesci brings the context of the combustible characters he’s played in other Scorsese films to this role as well. It always seems as if there’s something simmering just below the surface whenever Bufalino is on screen.

And then there’s DeNiro – arguably the greatest actor of his generation. He does more with a silent close-up than most can do with an entire monologue. The film uses this skill of his to great effect. There are multiple moments where we just watch Sheeran’s face as he considers the situation with which he’s presented.

The final note I’ll make about this cast is that, amid all these legendary acting icons, Anna Paquin more than measures up. Some have bemoaned her seeming lack of dialogue in the film. I always get frustrated when these types of discussions pop up. It’s an affront to great actors to say that they can’t perform without dialogue. Great actors are able to convey so much through just a simple look. Paquin is a great actress, and she has some of the best reaction shots in the film. She plays Sheeran’s daughter, Peggy, and she is – in many ways – our eyes. No, she doesn’t have much dialogue in the film, but that doesn’t keep her from being a vital presence amid all these titans of the screen. It is Peggy who realizes the lengths her father will go, and it is Peggy who surmises when he has gone farther than even he imagined possible.

Scorsese’s eye is trained firmly inward here. In many ways, The Irishman is a comment on Scorsese’s own work within the gangster genre. Whereas Goodfellas was made with the flash and flair of a younger man, this film is steeped in the considerations of old age. The film is told through flashback, but it is also consumed with legacy and the specter of death. Repeatedly, when side characters appear on screen, text below tells of the grisly manner of their future death.

In general, the film is quite self-referential to Scorsese’s earlier works. But The Irishman avoids the mistakes that Todd Phillips’ Joker made. This is not a blatant retread of films like Taxi Driver and The Gangs of New York. The film has shots or sequences that mirror those films, but it brings something new to the table from a thematic or technical standpoint.

One of my favorite shots in the film comes just before the film’s pivotal interaction. A few characters are traveling together in a car and the camera cuts to a shot of a telephone pole. As the wooden structure takes up the whole screen, its arm gives it the shape of a cross. Scorsese has never been afraid of using religious themes and iconography in his films. Here it has thematic significance when the scene is compared to the events leading up to the crucifixion of Christ.

Of course, The Irishman is a Netflix film, and it will soon be available for streaming in living rooms across the country. But I do think that the few who are able to see it on the big screen will appreciate the experience in a special way. There are some films – take Lawrence of Arabia, for instance – whose sheer images need the larger space for one to be able to grasp them. Surely The Irishman looks great on the large screen, but that wasn’t the main reason I appreciated seeing it in a theater. For me, it was the crowd around me experiencing this movie history right along with me that made it such a memorable event. Hearing what beats make people laugh and what makes them gasp is something you simply can’t replicate at home.

As the film comes to its end, Sheeran meets someone who doesn’t even know who Jimmy Hoffa was. We see in his face the worry that all his work may not have been worth it. These thematic, emotional moments take place largely in silence. That an epic film with the length of The Irishman chooses to end in such a poignant way is a testament to the talent on display here. You may never see such a group together all in one film for a long time. Whether you see this film in a theater or at home, this is a film that demands to be seen.

Hear our podcast review on Episode 352!