Movie Review: ‘Private Life’ is a funny, emotional story and one of 2018’s best films 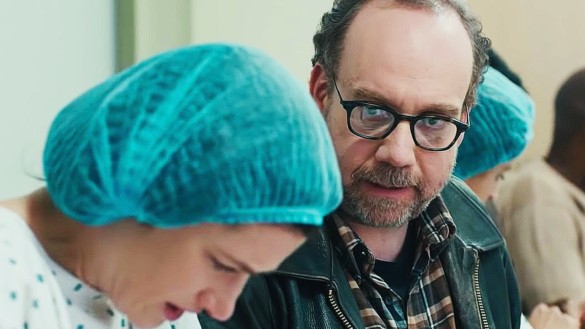 Synopsis: An author (Hahn) is undergoing multiple fertility therapies to get pregnant, putting her relationship with her husband (Giamatti) on edge.

Every film has a story. Good films are built upon a good one. But even good films can be afflicted with a case of tangential stories – scenes or characters that distract from the story at the heart of the film. It’s the best films that follow their story with a single-mindedness and unflinching attention that invites us to lean into the story unfolding before our eyes. Private Life, the latest from Tamara Jenkins, is just such a film and it is surely one of the best of the year.

The story at hand is about Rachel (Kathryn Hahn) and Richard (Paul Giamatti), a couple struggling with infertility and the options they have to get around it. They have tried everything. We meet them in the first scene as they are attempting an IVF procedure. Time is running out. Rachel is 41 and Richard is 47. They keep reminding themselves of the mantra they’ve heard from doctors – “You only need one good egg.” – but it’s quickly becoming more wish than hope.

Giamatti is certainly one of the underappreciated treasures in cinema today. He always brings something extra to his roles. He is one of the best actors working today when it comes to depicting frustration, and he plums those depths in an aching fashion here. Hahn has long been an underappreciated actress too. She is probably most well-known for her comedic roles in film and television, but she too always elevates the material she is given. Here, I think she gives a career-high of a performance, and her work was my favorite in the film.

Despite the emotional material, this film is hilarious. Much of that is owed to Giamatti and Hahn, but the script by Jenkins finds the humor in even heavy moments. The script also does an incredible job of giving us the information we need. Most of us probably do not know the finer points of the medical procedures here, but we get all the information we need to follow the story and never too much to pull us out of it.

I was also moved by the film’s music and cinematography. The music is by Adam Bennati (coordinator), Ben Holiday (editor), and Howard Paar (supervisor) and the cinematography is by Christos Voudouris. Both elements work together in powerful ways, especially in vignettes sprinkled into various points of the film – the sun through the trees outside a window on a car ride or leaves flying into the air during seemingly mundane lawn chores. This film has surprising treasures in store that you won’t want to miss.

The film shifts when Rachel and Richard’s “niece” Sadie (Kayli Carter) comes to live with them in their New York apartment. I put niece in quotations because she is not really related to either of them. Sadie’s father Charlie (John Carroll Lynch) is Richard’s step-brother. Once again, the script does a great job of spelling out the particulars so that we don’t get confused. Sadie recently dropped out of college and is pursuing a writing career. She is excited to live with Rachel (a playwright and published author) and Richard (a former theater actor), not only because they are family to her but because of their influence on her art. Soon, Rachel and Richard become equally interested in the impact Sadie can have on their lives.

Early on in the film, a doctor mentions that they should consider third-party reproductive options. Rachel won’t consider it. That is, until they consider that Sadie could be the perfect candidate. They ask her – in a scene that cranks up the awkwardness and humor – and she, somewhat surprisingly, is interested. Her mother Cynthia (Molly Shannon), however, is not interested. She learns about this plan at their Thanksgiving dinner table – in a scene that REALLY cranks up the awkwardness and humor – and she has a…hard time adjusting.

I’ve gotten pretty far into this review without mentioning it, but I guess I should just come out and say it – yes, this is a Netflix film. And while that fact comes with a stigma for many cinephiles, don’t let it keep you from seeing a truly impressive film. I’m not sure how many year-end lists this film will end up on, but it will probably end up on mine. In any case, Netflix has been producing fine films now for at least the last year, if not longer. Mudbound, The Meyerowitz Stories, and To All the Boys I’ve Loved Before are all impressive films in their own right and that doesn’t even account for Netlix’s soon-to-be-released films like Roma, The Ballad of Buster Scruggs, and next year’s The Irishman. If names like Cuaron, Coen, and Scorsese aren’t bothered by the Netflix logo, then I don’t think we should be.

I won’t go any farther into a discussion of this film’s plot, because you really should go see it for yourself. Suffice it to say that the story takes surprising turns and emotional twists. But it never loses its humor and, on top of that, it never loses sight of the story at its heart. That is surely a testament to the fine screenplay and the impressive acting performances. I can’t say it enough – this is one of the best films of the year. Go log into your Netflix account or find someone else’s. No matter how you do it, you’ll want to see this film.