Movie Review: Lovelace bares it all with grim reality 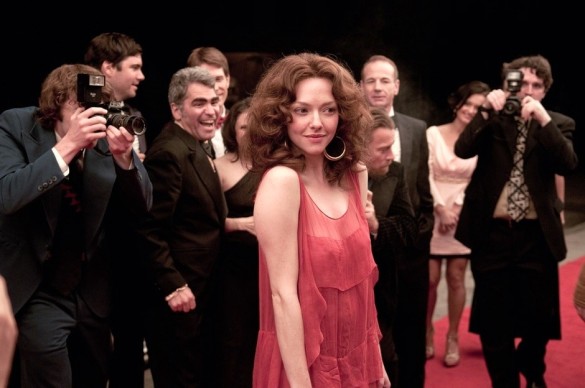 DIRECTION
Rob Epstein and Jeffrey Friedman’s direction for Lovelace is pretty interesting in the take on a story that is pretty hard to..okay I can’t say it. But it is a rough story and it’s told in two separate ways that is interesting. The camera work is pretty creative and in a film like this, it really needs to be to keep it respectable. There is some nudidty, the first for Amanda Seyfried, but it’s tasteful and with purpose, especially given the content. However, Epsteign and Friedman uses some classic camera tricks to showcase what’s going on without it being too much or heavy handed. The aesthetic is great and puts you into the 70’s with the hairstyle and makeup as well as the dialogue. By the end of the film, the pieces came together well for the most part in terms of the direction, leaving you mostly satisfied.

SCRIPT
The script is pretty interesting and at the same time it’s also kind of empty. In the first half of the film, we see the story in ways that is more surface level, pure (in whatever ways it can be), and pretty generically from an outside perspective. And then it’s flipped around, and we see the same exact story but through the lens of Linda Lovelace, which is much deeper, darker and much harder to watch. Her relationship with Chuck is abusive, emotionally and physically, as he would beat her, sell her body and force her to do really difficult things. She’s more or less forced into pornography which ends up making her famous through the movie, Deep Throat, which was really popular in the 70’s. And we get a sense of what the “real” story was and the kind of environment the porn industry can be like. And in a world where women are always subjectified, it’s incredibly believable. Where the story lacks is in the character of Linda Lovelace. You don’t really get to know her much as a person outside of her dark and painful feelings in a very specific time period. So while we feel the grimness of the industry, we don’t know her as a woman which is where the story lacks in some ways. If you’re looking for a biopic on the woman of Linda Lovelace, you need to look elsewhere, but if you’re looking for a behind-the-scenes of Deep Throat movie, this is the a good one.
Grade: B+

PERFORMANCES
Let me start off by saying Amanda Seyfried is pretty good as Linda Lovelace. In a movie that requires something new for her and requires her to bare it all in some cases, she pull it off well. I personally would have been incredibly uncomfortable and she does a great job given the subject material and what she’s put through. For a character who is forced to do physically and emotionally damaging things, she is pretty amazing. Peter Sarsgaard does a great job making you hate him and being the push-over husband who is only about himself. The rest of the cast is replaceable but they all do a good job and aren’t distracting from the film.

SCORE
Stephen Trask’s score is mostly generic but does add some nice touches to the 1970’s aesthetic we get here. The melodies are nice and energetic in the first half, yet dark and more ominous in the second half. It’s not distracting but nothing that will stand out either.