Movie Review: ‘Like Father’ is a comedy with unexpected heart 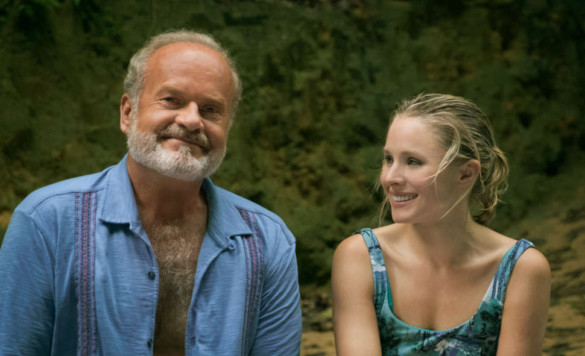 Synopsis: A workaholic woman who is left at the altar takes her honeymoon trip anyway, joined by her overachieving father, who left her mother because he believed his family was holding back his career.

You may think you have Lauren Miller Rogen’s 2018 comedy Like Father sized up by the previews, but it has unexpected treasures in store along the way. Rogen displays talent across the board in this film as writer, director and producer. Her writing, especially, shines through.

Kristen Bell stars as Rachel, a workaholic who is left at the altar by her fiancé, Owen (Jon Foster). The opening scene of the wedding does such a great job of setting up Rachel’s character in the film. We learn so much about her character where, in lesser films, this would have simply been handled using exposition. Miller Rogen shows us rather than telling us. For instance, Rachel takes a work call as her wedding processional is commencing which actually makes her late to her own wedding. She puts her phone in her bouquet before she walks down the aisle, and when Owen realizes what happened, it brings about second thoughts in front of all their family and friends. Included in that group is Rachel’s estranged father Harry (Kelsey Grammar), who she hasn’t seen since she was five. Afterwards, Harry seeks her out to console her, and they go out to the bar together to reconnect and drown their sorrows. They drunkenly decide to accompany each other on the cruise that would have been Rachel’s honeymoon, and the film’s basic plot begins to take shape.

I resonated with Rachel on a bit of a deeper level given that I, too, work in the advertising industry. In my day job, I am an assistant account executive at an agency in my hometown. Rachel is an account executive too, but she has her sights set on a promotion to accounts director. Her position is one aimed at wining and dining clients and securing new business. While my job isn’t quite the same, I could appreciate the unique responsibilities of such a position. There’s a draw to the job, and Rachel has certainly caught the bug.

The film certainly unpacks the notion of being too tied to one’s job. This is something that many comedy films have used throughout the years, often in the form of a parent who is too focused on work at the expense of their children. Here, it is Rachel’s addiction to work that pulls her out of being present in her life. It certainly had an effect on her wedding, but we see other effects it has on her life, too. In fact, her phone is almost another character in this film, and I thought Miller Rogen’s writing handled that material well.

The film is also supported by wonderful performances from Bell and Grammar. They both had me laughing at various times, but they find the humanity in their characters that takes the film farther than one might expect.

When the film moves to its sea-faring setting, it becomes possibly the most successful product placement I’ve ever seen in a film. The Royal Caribbean logo and title appear so much in the film, it almost seems like one long commercial. It would be hard to watch this film and not want to go on a cruise afterward. The unique experience of meeting random people who then share the entire trip together has a clear effect on Rachel and Harry and aids in bringing them together.

They meet a group of other honeymooning couples who quickly find out about Rachel and Harry’s unique situation. They all encourage each other to make the most of the cruise by participating in the evening activities. One of the funniest scenes comes when Rachel and Harry play the cruise’s house game show (a spin on The Dating Game). It had me laughing hard as their answers are juxtaposed with those of actual honeymooners. At the same time, I didn’t feel like the film had quite enough for the supporting cast to do. I feel it would have been stronger if we learned a little bit more about the rest of the group and there could have been more fodder for the film’s unpacking of relationships in their various forms.

At the end of the day, though, this is a film about one relationship in particular – the one between Rachel and Harry. In most other films of this kind, we’d go through the whole thing and come to a happy ending on the other side in a basic flow. This film takes some unexpected stops and pauses that keep you on your toes, even if it eventually gets to the happy ending on the other side.

Another great moment that I must mention comes when Miller Rogen’s real-life comedian husband, Seth, joins the film in a minor role as Jeff, a man that Rachel meets at the bar. They have a fling, and Jeff thinks it is more than just a one night stand, so he tags along with their group excursion when the ship docks in Jamaica. Before he realizes that Rachel is not looking for anything serious, there’s a great self-referential bit where the tour guide passes around a joint and Jeff refuses saying that he’s never smoked marijuana. The joke was obviously written with Seth Rogen in mind, and the execution is perfect.

Though it takes some leaps of varying sizes, some of which we may not be inclined to fully believe, Like Father is an enjoyable film that brings genuine laughs, has well-acted lead performances, and unpacks our culture’s need to stay connected at the expense of the present moment. It strays from the formula just enough to keep things interesting, and it’s a comedy that is well worth your time.