Movie Review: Inside Llewyn Davis is another Coen classic 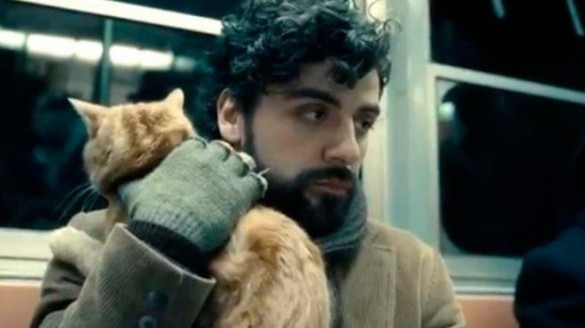 Written & Directed by: Joel & Ethan Coen
Starring: Oscar Isaac, Carey Mulligan, John Goodman
Synopsis: A week in the life of a young singer as he navigates the Greenwich Village folk scene of 1961.

SPOILERS for this film may ruin your experience. Please proceed with caution.

After watching the trailer several times, I thought I knew what I was getting into when I sat down for Inside Llewyn Davis. I could not have been more mistaken. I was expecting something similar to O, Brother Where Art Thou? and what I got was more like A Serious Man. The marketing genius displayed here is a rare feat in Hollywood these days, and the swerve audiences will get when this expands nationwide this weekend will probably disappoint some and genuinely impress others. Wiser minds than my own may have known better, but I was impressed by the trickery. This is the only time I will reference Iron Man 3 in a Coen Brothers review, but it reminded me a lot of the red herring of the Mandarin character that we were fed in that trailer. Another reference to be made is to Harmony Korine’s use of repetition, so if you like how it is used here, I’d recommend Spring Breakers. As far as general direction goes though, Inside Llewyn Davis features solid landscapes, beautiful performances, and captivating moment after captivating moment. The Coens know how to pull characters to the forefront of a story, and it takes very little time for them to establish each character in this film.

The screenplay for Inside Llewyn Davis is quite similar to me to that of A Serious Man in that it follows one character through his day-to-day life. However, this time around it’s a folk singer in the 1960’s in the midst of his struggle to become a successful musician. Devastating events aren’t exactly less powerful than those that occurred to Mr. Gopnik in the aforementioned film, but certainly Llewyn seems a bit more used to tragedy of his existence. That is not to say however that Llewyn is an optimist–for his pessimism often gets in the way of opportunity to succeed. This type of character is hard to watch, but as opposed to the character I had expected coming into the movie, I have to say it seemed much more plausible and realistic. We view a small portion of Llewyn’s life in a circle, giving us enough of a sample to get the gist of who he is. Overall, I felt that the narrative was sharp and witty, and while the story may be a tragedy, at least it is a marvelous one.

Strong performances from Carey Mulligan, John Goodman, and Justin Timberlake bolster the film’s cast around the energy of Oscar Isaac, who portrays the film’s lead role. Something should also be said about the cat Ulysses, too. The Coens humanized the cat and showed what can happen when you use the camera unconventionally–a minor pet turns into one of the film’s major characters. Isaac plays a bit like Standard in Drive, though this is a small criticism as his charisma and honesty as Llewyn was enjoyable. I do think it is noteworthy to see Carey Mulligan back in the saddle again as her role as Daisy in The Great Gatsby earlier this year was underwhelming knowing what talent she possesses. In years to come I think Carey Mulligan will be recognized as one of this era’s greatest talents, and this will be a nice notch in her belt on the way to superstar status. John Goodman’s bitty, weary, obese old man was spectacular, and after recently hearing Goodman saying in an interview that he himself was tired, I have to believe part of that exhaustion comes across in his performance. As most Coen films do, Inside Llewyn Davis relies on its characters and performances and the casting was spot on.

The music was a big disappointment to me simply because I expected the song from the trailer “Fare Thee Well (Dink’s Song)” to be one among many great folk songs in the film. However, for me the songs were mostly passable mediocrity that went alongside the character of Llewyn. Just as it seemed a great tune might be coming, a corny or boring folk song hit the speakers. Let me be clear though, I think this too was calculated and executed perfectly and the ability to pick average songs did require a lot of talent. The additional music was fine, though nothing had me awestruck.

Inside Llewyn Davis is a great story of a character in the midst of struggle, and while it may not exactly uplift one in the traditional sense, it reminds me of that beautiful and truthful scene towards the end of Tokyo Story with an exchange between an elderly man and a young woman: