Movie Review: ‘I Am Mother’ uses lies and confusion to powerful effect 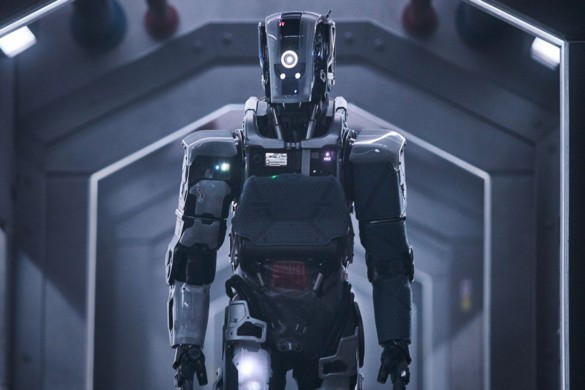 Synopsis: A teenage girl is raised underground by a kindly robot “Mother” — designed to repopulate the earth following the extinction of mankind. But their unique bond is threatened when an inexplicable stranger arrives with alarming news.

The new Netflix film I Am Mother leans into what we as the audience do not know. At the same time, it holds a clear appreciation for the major works of cinema in science fiction that cause us to guess at what is coming next. It uses this to its advantage as, just as we begin to jump to conclusions, it takes a few turns.

One of those conclusions is that machines are not to be trusted. At the beginning of the film, we learn that the story takes place in some sort of containment shelter where human embryos are being cultivated. We see the first child being born. We only ever know her as “Daughter” (played by Maddie Lenton, Summer Lenton, Hazel Sandery, and Tahlia Sturzaker at various stages of life; for most of the film, the character is played by Clara Rugaard) and, here in the early stages, we watch as her “Mother” cares for her. Mother is a robot (played by Luke Hawker and voiced by Rose Byrne). She is caring, far more caring than we might expect. We have no reason to doubt her sincerity, other than what we know from past science fiction. We watch as the machine attempts to soothe the crying infant, and we empathize with the fact that even a robot can’t get a baby to stop crying right away.

Is there any character in cinema history that looms larger over an entire plot device than HAL-9000 does over artificial intelligence? Director Grant Sputore clearly wants us to make that connection, but even without the similar look, we cannot help but think of the computer from 2001: A Space Odyssey whenever AI is a part of the story. I think at the beginning of this film I wanted to believe that this robot was caring for this child. But everything within me doubted that.

This is one of the great components of this story by Sputore and screenplay by Michael Lloyd Green. Even though Mother gives us no reason to doubt her at the beginning of the film, we automatically resonate with the girl over a machine. Early in the film, the girl finds a rat in a hallway. She has been told that there is no life outside their walls due to the contagion in the atmosphere. But now, she begins to doubt that. When the girl disobeys her Mother, and opens the airlock that seals their home from the outside, we realize the trick this story has begun to play on us. If it were a human mother/daughter relationship, we’d expect there to be consequences. But, since the Mother is a robot, we root for the girl to disobey orders.

We see the Mother killing animals dispassionately early in the film. It gives the girl pause, but based on everything she’s been told about the inhabitable conditions outside, it makes sense. It doesn’t make sense when she finally does open the airlock to find a woman (Hilary Swank) outside.

This causes us to doubt all the answers we’ve been given. Since the girl is our audience stand-in, she doubts as well. Is the Mother hiding something? Is this new woman telling the truth when she says that there are other robots like the Mother that harmed her? We have our guesses, but we honestly do not know.

The girl is given tests by the Mother repeatedly during the film. The girl asks what the tests are for, and the Mother responds that their results reflect more on her as a mother rather than on the daughter. But who is grading the Mother? What’s the point?

From a story perspective, one of the points is to give room for the film to open up a discussion about philosophy. One of the girl’s tests involves the writings of Comte and Kant. What’s good for the most amount of people is the path that should be taken. What if that means sacrificing yourself to save others? The girl posits – what if you are a life-saving doctor and one of the others is a murderer? Wouldn’t it be prudent to save yourself instead? These questions of conformity vs. independence continue to live inside the girl’s mind.

The woman brings all these questions to the forefront, as her version of what is happening outside bears no resemblance to what the girl has been told by the Mother. The film uses these competing narratives to powerful effect. We don’t know who to trust. Every time we think we can trust one story over the other, something happens to cause us to doubt once more.

In terms of themes, the film gets us to a point where we consider how those under totalitarian rule are blinded to the atrocities of their leaders. At multiple points when the girl is confronted with the woman’s version of events, she says that her Mother has treated her nicely and couldn’t possibly be like the other robots (the woman refers to them as Dozers) the woman describes. I think it also attempts to wrestle with themes of free will and faith, though that seemed a bit more muddled to me.

Eventually, we see the outer world, and this is where the film’s best visuals are deployed. The cinematography is good throughout, but especially in these scenes. The girl thought she would find the answers she needed out there, but does she?

It is this ability to always present us with new questions that makes this such a strong film. Even the ending opens up new lines of thought. For a film that is treading in stories (sci-fi, post-apocalyptic) that have been used often before, finding new ground is an achievement unto itself.

The acting is well-done, which is mainly Rugaard and Swank. We know the kind of talent that Swank has, and she gives this role what it needs. But I was most impressed with Rugaard. There’s a lot of ground to cover in this role. She has to be able to play the naiveté of a child while also underscoring the fact that this particular child has been uncommonly trained and is quite knowledgeable and resourceful. She handles it well, and I look forward to the rest of her career as an actress.

I look forward to watching this film again, which is always a great sign. There are a lot of questions here that I’m sure a second watch would make more meaningful. I was impressed with the ways it honored its influences (2001, the Blade Runner series, Ex Machina) but also forged new territory. At the end, we still don’t know what happens.

But maybe that’s the point.