Movie Review: ‘Hereditary’ has only just begun to leave its demented mark 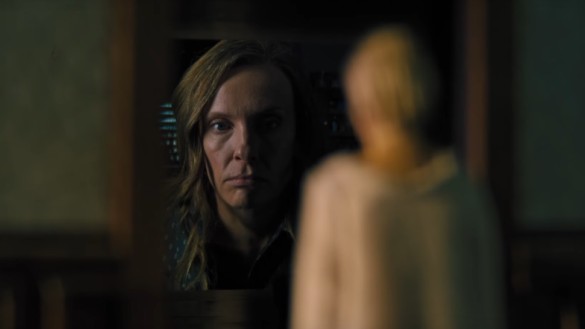 Synopsis: When Ellen, the matriarch of the Graham family, passes away, her daughter’s family begins to unravel cryptic and increasingly terrifying secrets about their ancestry. The more they discover, the more they find themselves trying to outrun the sinister fate they seem to have inherited as it slowly destroys everything they know.

The bold and aloof Sundance-raved about feature debut from Ari Aster, Hereditary, reigns supreme over practically any and all psychological incarnations to have been released in the thriller and horror category this decade. The ongoing deception being persevered in to our protagonists (are they really though?) so prematurely on in the film coinciding with the inclusion of a viewer as well, allows everything that follows to become increasingly aggravated and insinuated by Aster’s craft. It gradually makes its way deeper, and deeper in to a cut, until there’s not an ounce of optimism or notice of direction left in the atmosphere. Ultimately leading to a devilish compliance as the conclusion. If you weren’t afraid of the unexplored heinous terrors your lineage could possibly carry, this will ratify the notion that the past, can and will haunt you.

Standing as the opening basis, the Graham family just recently lost their matron grandmother. As most relatives or descendants would silently mourn, Annie (Toni Collette) feels culpable for not feeling anything significant regarding her mother’s passing. She’s reassured by her husband Steve (Gabriel Byrne) that she isn’t at fault, and notes that she didn’t have the highest of character anyway. Although nothing is ever spoon fed to us, there’s hints scattered throughout the movie about Annie’s mother that further confirms that verity. And since witnessing, Hereditary has unquestionably began to grow on me. It’s hauntingly cryptic, disposing fiercely of its imperative central storyline by the final act. Toni Collette and Alex Wolff are the reason this film is where it is now. Collette is near-perfect, vividly applying the elemental strain of an unbalanced woman’s mental descent into madness that her character Annie, is on path to collide with. And Alex Wolff is wholly the biggest surprise, only here they examine the dissection of indisputable guilt wearing and tearing upon a teenager’s conscience.

Being hailed as this generations The Exorcist is quite the impressive feat, yet I can’t fully grasp the magnification whether this can achieve the similar cultural impact that the former is so copiously basked in. Due to its non-formally open storyline, it’ll be off putting to people who might not usually go-to or watch movies. Some might endure difficulty in following the plot and base their level of engrossment all from a visual aspect, which is thoroughly miniscule when compared to its conceptual warfare. There’s definitely a handful of shots that’ll be plastered into and around my brain for a multitude of future days, but the eerie imagery is no match for everything that one can’t see. The fear of something happening without us knowing, or the abhorrent things we hear but can’t see is the candid anxiety of it all. We’re never really given anything truly realistic, but our mind automatically assumes the worst and constructs an elucidation of all of our nightmares wreathed into this family. It’s extremely overwhelming, yet a celestially builded world from Aster. Terror can be anywhere, even living amongst you.

There’s a lone part in me that feels a film that harnesses it’s screen time as much as this one does isn’t always beneficial. Hereditary epitomizes the negative effects that can arise from a production willing to sacrifice portions of their exposition and rising action for a more meaningful finale. Thereby doing this they cut their margin of error off significantly. However, this takes just a bit too long to get up and running. Aster’s patience is admirable for certain—especially as a debut outing—and while this decision was ultimately insurance for character development, there’s too much of an ample omnipresence shed upon the preparation in comparison to that of the unfolding present-day actions partnered with the finale. Aster sure didn’t leave his characters in the dirt however. As the morality and disposition of all of them are modified by the ending one way or another. Sadly that primitive instance is just something a film can fall victim to when taking a leap of faith like this here with a narrative.

As in the aforementioned, every last piece of character growth, dialogue, or even inevitable unhingement is immaculate. Not shocking but once again, all of this is credited to Aster. He entangles so many contradicting and interlaced senses of paranoia that nearly every character becomes engulfed in. Not only figuratively but literally as well. Perhaps the scariest part of it all is the fate that’s greeted to them by the dissolution. By that time, every persona has been exhaustively analyzed. There’s nowhere else to go with them, they’ve reached their ultimatum and peak, making for one hellishly absolved conclusion. Glad that Aster had the willpower to walk away from the final product instead of attempting to condone an extended welcoming.

While the over abundance of hype attached to the movie might not have been entirely fulfilling, Hereditary will take advantage of its ability to ruin you. Not that I’m hoping it does, but it just might. Assuming they campaign hard enough to make an appearance at next year’s Oscars for a Toni Collette nomination, you’ll be seeing more of this film as we go farther throughout the year. As for now, enjoy the mental derangement of this movie along with the nightmares and sleepless nights that are to come.