Movie Review: ‘Hellboy’ reboot is as bad as it gets 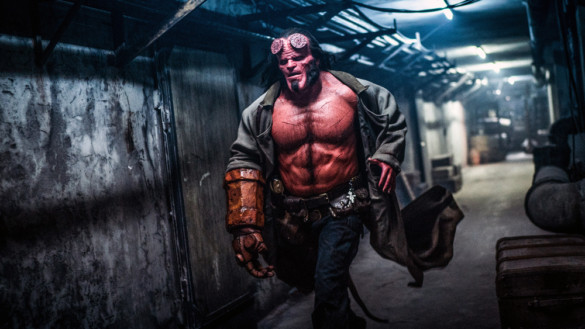 Synopsis: Based on the graphic novels by Mike Mignola, Hellboy, caught between the worlds of the supernatural and human, battles an ancient sorceress bent on revenge.

About 1 minute into Neil Marshall’s Hellboy is about all it took for me to realize it was going to be a long and turbulent ride. The opening scene narrated by Ian McShane, as Professor Broom, which should set the tone for the rest of the film instead makes it fairly clear that the film has no idea what its tone is supposed to be. Aside from simply poor writing, the scene uses an odd blend of violence, humor and some unnecessary profanity that seems awkward and out of place. Here we also get our first taste of the CGI that is scattered throughout the film and it is painfully bad. Over the next 15 minutes, we meet Hellboy (David Harbour) and get a feel for what Marshall is going for and what to expect from the remaining hour and 45 minutes. By then I was already rubbing my head and glancing at the exits trying to weigh out the risk/reward of making an early departure. 15 minutes in and the film was already dragging…and it keeps dragging. But I kept on mission and buried my despair in popcorn and caffeine free diet vanilla Coke, and this is what I took away from it.

In that first 15 minutes, we are also introduced to a recurring theme in the film: When things are getting dull add a fight sequence and queue the rock music. Now a classic rock hit played over some action is nothing new to cinema but Hellboy somehow overdoes it and even made me roll my eyes to Mötley Crüe’s Kickstart My Heart. It all feels forced and my guess is it’s meant to distract from the sloppy action which is unsatisfying with poor editing, shoddy CGI and dull climaxes. They usually add a splash of poorly executed humor and quickly move on to the next scene which is another theme. The film never allows time to digest a sequence and instead crams each down the viewer’s throat just to move on to the next. In this way, it is difficult to really put my finger on the film’s pulse. I can’t tell if it wants to be non-stop thrill ride or a sarcastic comedy. Additionally, the film, although, according to my research, is sticking close several plots from the Mike Mignola’s creation, is all over the place introducing numerous side characters with no backstory or explanation and cramming multiple stories into the 2-hour runtime. Again these side characters and plots occur with very little time to settle and feel poorly connected. When combined with the fast pacing the film is disjointed making it difficult to remain engaged with and feels more like a chore and than entertainment. By the film’s end I could hear most people in my theater groaning over what we all just witnessed which is unfortunate as most films that I may have not enjoyed, I still hear a mixture of responses from the audience post-credits.

It is difficult to really talk about the performances from the cast as I was constantly distracted and drawn out of the story from boredom. But I will say the one positive thing about Hellboy is Harbour makes a fairly decent lead. From the trailers, I didn’t think I was going to enjoy his take on Big Red but over the course of the film, I learned to appreciate him in the role. Harbour has a way of delivering sarcasm and dry humor that really fit with Hellboy. He gives in to the role and you can see his commitment but unfortunately, there was not much Harbour could really do with the material he was given which made most of his attempts at humor land flat. The other performances were adequate but nothing really stood out. It was refreshing to see Daniel Kim as Ben Daimio, I personally had not seen him on screen since Lost. Daimio has an interesting arch which I would have like to see more of but, again, the script doesn’t allow for much character development and his presence in the film feels more like an accessory than a fleshed out role. Milla Jovovich as the protagonist, Nimue The Blood Queen, has minimal screen time and by the end of the film, I found myself not really caring if she succeeded in her evil plot. Additionally, I did not care much for Ian McShane’s Professor Broom, his character felt stale and not really significant to the story and I didn’t buy into any connection between him and Hellboy. With no energy from Hellboy’s characters, it makes it all the more difficult to stay engrossed in the film as well as invest in the story and each character’s defeats and triumphs. It is another pain point of Hellboy that is hard to get passed.

Marshall’s Hellboy is getting hammered by critics and for good reason. Del Toro’s original concept was a hit and maintains a decent following and when you attempt a reboot of a successful film you have to bring your A game because before it even hits theaters it is going to take some lashings. Additionally, it is reasonable to assume that most reboot’s never really match up to the original. In the case of this one, the film falls very far from meeting even minimal expectations and is not a film I would recommend to watch even just for kicks and laughs. Granted some may argue that Del Toro’s version isn’t perfect but what he did do well was breathing life into his characters and bringing a popular comic book character to screen with some style and edge. As hard as I tried it was difficult not to mentally compare the two films side by side which makes the flaws in this recent production stand out all the more. I had my doubts going into the film and I was honestly hoping to be proven wrong but in the end, the film was much worse than I had imagined. A few months back I made a decision to essentially boycott any future remakes, prequels and unnecessary spin off’s (With maybe a few exceptions). The last few films like this have been incredibly disappointing and have felt more like money grabs than real attempts at art and cinema. I lifted my boycott for the sake of this review and I can safely say this film truly hammers in the reason why I swore off these films. It brings nothing interesting or refreshing to the Hellboy saga and offers no reason for existing other than to cash in on the original’s success. Word is that this film is to be the first in a new media franchise similar to what Disney has done with the Marvel Cinematic Universe. If this debut is any indication of what we can expect it is going to have a long hard road ahead of it and there is almost no chance that I will be along for the ride.