Movie Review: ‘Hobbs & Shaw’ is a crazy, but fun, entry into the ‘Fast & Furious’ franchise 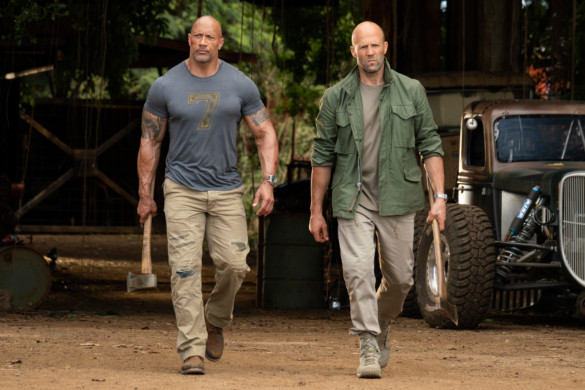 2019 has given us some fantastic films but the one thing I think it’s been lacking is a traditional summer blockbuster. Thankfully, Hobbs & Shaw is that perfect summer popcorn flick. If you are a fan of cheesy action movies from any era, aren’t afraid to admit you enjoy everything Michael Bay has directed, or love anything Nicholas Cage has starred in, then this is the movie for you! It literally takes every gimmick, from every era of great action b-movies and makes them work, gloriously, on the big screen. I know many people will disagree with me, but I love this movie and am not ashamed to say so.

Hobbs & Shaw picks up two years after The Fate of the Furious and is the first official spin-off in the series. Other than a cameo or reference here and there, you don’t really need any prior Fast & Furious franchise knowledge, but it does add to the viewing experience. This film reunites DSS Agent Luke Hobbs (previously in Fast Five, Fast & Furious 6, Furious 7, and The Fate of the Furious) and former spy/mercenary Deckard Shaw (Furious 7 and The Fate of the Furious). Even though they despise each other, they must work together to save the world from a deadly programmable virus. The film also introduces us to Shaw’s MI6 Agent sister Hattie, played by the amazing Vanessa Kirby, and features a cyber-genetically enhanced bad guy named Brixton Lore (Idris Elba).

Hobbs & Shaw may not appeal to everyone, but it does have a lot going for it. The macho-man banter between Statham and Johnson is funny. The action starts pretty early in the film and never lets up. It embraces highlights the differences between Jason Statham and Dwayne Johnson’s typical action-star tactics- Statham is martial arts driven and tactical, while Johnson usually takes the “hulk smash” approach. Though this film is mostly explosions and Dwayne Johnson punching people, it occasionally reminds you of its Fast & Furious origins. There are several intense car chases and stunts, plenty of vehicular eye-candy, and bad guys on futuristic motorcycles.

Idris Elba is an excellent b-movie bad guy. He embraced and delivered every cheeseball line of dialogue he was given with Oscar-worthy precision. It’s one of the reasons I think this movie worked for me, it didn’t take itself seriously and it fully committed to its over-the-top, campy style. One of my complaints about previous films in the series is their over complicated plotlines and convoluted ways to make “precision drivers” needed by super-secret government organizations. Hobbs & Shaw keeps it simple with a traditional “save the world on a time crunch” plotline. Another positive for me was how amazing and bad-ass Vanessa Kirby was. Even when sharing the screen with Johnson and Statham, two huge guys with even bigger personalities, she stood out and held her own. She’s an interesting character, who can take out bad guys just as easily as her macho costars.

The film does have a few faults. The beginning is a little rough. Hobbs and Shaw trying to outdo each other with insults and their manliness is exhausting, but eventually the film finds the right balance. It also felt a tad long at two hours and fifteen minutes, but most of that dragging was felt in the first act. Other than that, I have no complaints.

So, to wrap up, Hobbs & Shaw is exactly as advertised. It’s a fun action flick, with gratuitous violence, crazy stunts, and lots of entertaining bickering between Jason Statham and Dwayne Johnson. It has surprise cameos (people and cars) and stellar performances from Vanessa Kirby and Idris Elba. If you’re looking for a film to turn your brain off and help you escape or are craving a high-octane action adventure, then I highly recommend you see Hobbs & Shaw in the biggest and loudest theater possible.