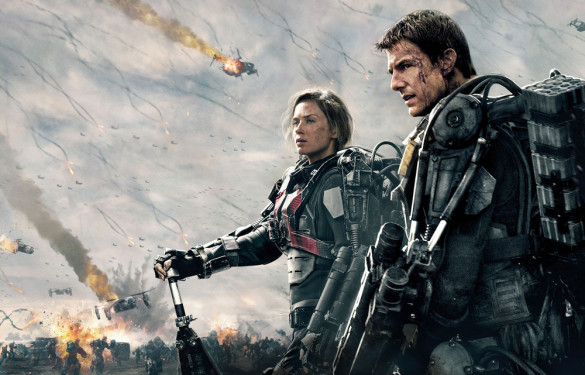 Synopsis: An officer finds himself caught in a time loop in a war with an alien race. His skills increase as he faces the same brutal combat scenarios, and his union with a Special Forces warrior gets him closer and closer to defeating the enemy.

DIRECTION
Doug Liman’s Edge of Tomorrow is one of the bigger surprises of the year as the marketing for this film did nothing for me. However, Liman found a great blend of action and storytelling that makes Edge of Tomorrow one of the better films of the summer so far. The way he edits and pieces this story together is something I wish Michael Bay would take cues from. It’s pieced together magnificently. The action is enthralling and intense, all while serving the story and engaging you with his characters. His camera shots are creative at times and the aesthetic he creates in his war battles are like a PG-13 version of Saving Private Ryan, especially when you add in the irony of an invasion happening in France. The third act becomes a little bit average though and loses some of it’s muster, mostly due to a script issue. And the ending lost it’s potency when the final elements draw to a conclusion, but again, part of that blame goes to the script. All in all, Liman is terrific here and this film is a lot of fun.

SCRIPT
The story begins with a montage sequence setting up a future world where aliens have arrived and started a war on two different fronts. In this sequence we see Cage (Tom Cruise), a military Public Relations rep, on cable news discussing how they are fighting the war with new suits they built. With these new suits, a soldier by the name of Rita (Emily Blunt) has emerged as a hero and considered the best soldier in the suits. After Cage is ordered to the front line to help promote a big invasion, he refuses and is arrested and sent to the front line anyway. It’s not long into the invasion, which is chaotic and violent, Cage is killed and he wakes up back at the base where he was arrested. From here a “Groundhog Day” effect develops and he’s forced to figure out why he keeps dying and re-living the same day. He eventually meets up with Rita, who knows what he’s going through and together they start to take advantage of Cage’s condition, much like you would playing Modern Warfare on X-box. While the script does work much like a video game, the use of time travel is effective and alluring. Screenwriters Christopher McQuarrie and Jez Butterworth do a wonderful of blending humor with the drama that was perfectly timed. The third act however becomes very predictable, as set up earlier in the film and loses the energy the film had built up. It more or less becomes an average action film at that point, with action sequences the new Die Hard would be proud of. There’s also a slight twist at the end that cuts it’s legs from under itself and lessens the climax. Overall, it’s still very enjoyable.

PERFORMANCES
Tom Cruise is pretty solid as Cage, who see’s a transformation happen throughout the film. Cage is nervous and timid but as the film progresses he has to learn to find it within himself, which Cruise showcases well. He’s funny when he needs to be and makes it feel natural in a world that wasn’t funny. Emily Blunt is pretty fantastic and carries herself like an action movie pro. Her aesthetic is badass and her chemistry with Cruise was solid. As for Bill Paxton, if he was going for weird and annoying, he nailed it. He also had a Kentucky reference, that us here locally would appreciate. The rest of the cast is fine and serve their roles well.

SCORE
Christophe Beck gets the nod to score here and while it’s more or less a snooze fest outside of the film, inside of the film it’s actually pretty effective. And that’s all the really matters, right? It adds some intensity to the film, especially in the films beach sequences. Overall though, it’s not Beck’s best work.

FINAL THOUGHTS
Edge of Tomorrow is one of Tom Cruise’s best films of late. The framework and structure is unique and well handled for the most part and is still exciting, even though the final act isn’t quite on the same level. The look of the aliens is great as well and have some unique powers that are used effectively. This was a nice surprise for me and one I’d recommend.