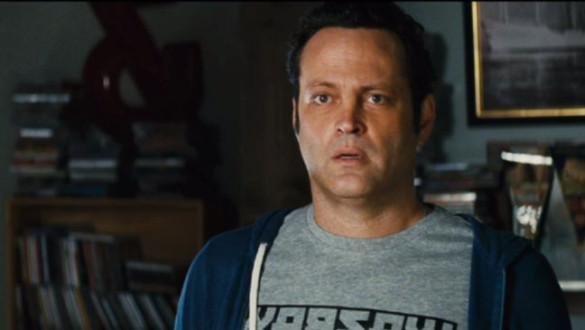 Synopsis: An affable underachiever finds out he’s fathered 533 children through anonymous donations to a fertility clinic 20 years ago. Now he must decide whether or not to come forward when 142 of them file a lawsuit to reveal his identity.

DIRECTION
The big question for me coming into this movie wasn’t whether it was good or not, but rather was it something different and better than what we’ve seen from Vince Vaughn lately. The short answer to that question; heck yes it was. Delivery Man is the re-hashing of Ken Scott’s French-Canadien film, Starbuck, which has the same premise and story. Scott uses a lot of the same scene set ups and imagery he used in Starbuck but put the focus on Vaughn’s strengths as an actor. There’s one sequence where Vaughn’s character takes one of his “daughter” to the hospital, and while there he goes back and forth talking with the daughter and the doctor. It’s really funny, purposeful and really exploits the character really well. Those sequences stand out for Scott and how this movie can work. Overall, the humor isn’t going to blow you away but Scott captures some heart felt moments which makes the film likable.

SCRIPT
The story focuses on David Wozniak, an underachiever who just found out his girlfriend his pregnant and is not sure if she wants David to be the father. In the middle of that, he also finds out that he has fathered 533 children after donating to a sperm bank 645 times, in which the clinic used most of them for reproduction. And now, the children he fathered are suing to find out who this mysterious person is to find out who their real father is. The film is a bit formulaic and very contrived as it sets up every moment, which makes it a crazy story. For most critics, who apparently have no ability to suspend disbelief anymore, it’s the part they have a hard time with. However, the premise of the story isn’t going for realism but for the heart. Yes, it does have some weird moments and some head scratchers but in a movie like this, it’s expected. The film is mostly about the effects decisions have on children and at the very core of every person, they want a father and a mother. Those relationships are hit on hard in several aspects, not just with David and his 533 kids. Predictability and formula doesn’t make a movie bad. Delivery Man, while it hits those beats, brings heart which is what makes movies fun.

PODCAST: Hear us discuss Robert Redford in All is Lost!

PERFORMANCES
Well as I mentioned earlier, the big question for me was whether this was something of worth for Vince Vaughn. Vaughn’s latest years haven’t been crazy and since Wedding Crashers he’s been mostly on a steady decline. Delivery Man is by far, the best work he’s done in 100 years, or at least since his small role in Into the Wild. Vaughn isn’t particularly funny here, there are some good moments, but there’s depth here we haven’t seen in ages. He brings his usual charm but also some emotional aspects every man has to deal with at some point. The father/son moments are brilliant and gripping. The final scenes of the film are incredible and it’s Vaughn at his best. Chris Pratt also does a good job and has more to do than originally thought. He’s the lawyer/friend who helps Vaughn’s character through the court case and has some good, fun moments. It’s all stuff we’ve seen before but it was good and never distracting. There’s one moment after the court case is over that is absolutely hilarious and unexpected. Cobie Smulders has a small role but does a find job and adds some great moments near the end.

SCORE
The score is very forgettable. You will hardly notice that there is one. Jon Brion hits all the familiar comedic tones you’d expect and doesn’t do anything that’s worth noting. However, the soundtrack music is amazing and is one I would recommend seeking out. There are some fun uses of Thunderstruck which I thought was great as well.

FINAL THOUGHTS
Delivery Man is the reason I love going to the movies. While it’s mostly formulaic and a bit contrived, it’s a lot of fun and has some good depth to the film. It’s not trying to do something outside of the box or become an Oscar contender. It’s just a movie that has a fun and weird story that wanted to bring something more than a comedic tone. I was intrigued by the trailer as it seemed to be something more for Vaughn. And you know what, it didn’t disappoint at all. It’s easily his best work in a long time and was worth the theater experience.