Movie Review: ‘Crawl’ is one of the better surprises this summer 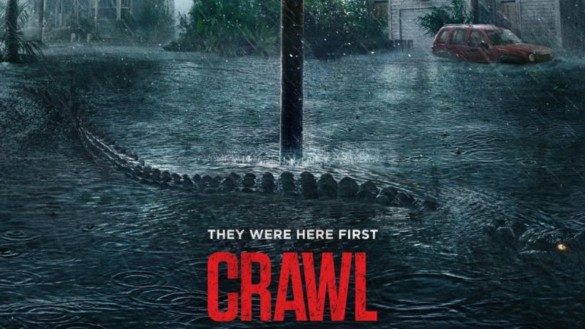 Synopsis: A young woman, while attempting to save her father during a Category 5 hurricane, finds herself trapped in a flooding house and must fight for her life against alligators.

love a good action-thriller, creature feature, or monster movie and have been waiting for 2019 to deliver. (Especially since Godzilla: King of the Monsters didn’t quite live up to it’s amazing trailers.) The trailers for Crawl stood out because it looked like it would be a more “realistic” monster flick and it was something new and original. I was super excited to see it and thankfully it did not disappoint. It gave me everything I wanted from this genre; it was suspenseful, tense, and crazy without going too far outside the realm of possibility.

Crawl follows University of Florida swimmer Haley (Kaya Scodelario) as she goes to check-up on her semi-estranged dad (Barry Pepper), with a category five hurricane fast approaching. She eventually finds him wounded and unconscious in the quickly flooding crawl space of their family home. She also discovers they are not alone- alligators have taken up residence beneath the house and are blocking the only easy exit.

My only requirements going into this film were: Is it as good as the trailer? Is it at least a little believable (being loosely based on real events)? And are the alligators actually scary or are they CGI mess?

Crawl definitely delivers the tense action advertised in the trailer without falling into that overpopulated category of “all the cool scenes were shown in the trailer”. The drama, while being crazier and slightly more unbelievable than most situations, felt real and not too far-fetched (have you seen the news stories coming out of Florida?). The alligators themselves were also realistic enough, but I’m not an expert on alligators. (and I’ve seen worse effects in bigger budget movies…) My only issue were their eyes. They looked red and weird in some scenes. Overall, their appearance, behavior, attacks, and other movements looked pretty real to me.

I have a lot of positive notes for this film. I think both stars, Scodelario and Pepper, did a great job. They were a believable father and daughter team that used their backstory to bring more drama and tension to the screen. I haven’t seen Kaya Scodelario outside of The Maze Runner movies so I wasn’t sure how she’d handle carrying an entire action flick on her own, but she pulls off the ‘tough and resourceful’ Haley well. Barry Pepper is a solid actor who has been in a ton of movies but you may not be able to place him- Saving Private Ryan, True Grit, The Green Mile, and The Lone Ranger to name a few.

Crawl also succeeds with its villains: alligators and a hurricane. The gators aren’t always on screen, but there’s an uneasiness and tension that never goes away because you know that they are there somewhere, waiting to pop out and bite someone when you least expect it. They’re also just normal alligators- nothing supernatural, or abnormally large, and I think that adds to their scariness factor (especially if you live in/around their natural habitat). The added threat of the incoming hurricane also contributes realistic stress to the film. The crawl space itself is both friend and foe. Every muddy lump or rock looks like a potential alligator once the water starts to rise. There’s also a maze of pipes and wires to either provide a much-needed gator barrier or hinder a quick escape. I love that Crawl was able to deliver a genuinely terrifying and stressful movie with realistic, 100% natural antagonists.

There have been complaints about certain aspects of the film, like “there are no basements in Florida” or alligators wouldn’t behave that way in a hurricane. I had similar thoughts watching the film, but after a quick google search, I was proven wrong. Even in areas prone to flooding or close to sea level, houses will usually have a crawl space. You won’t find a full basement, but the area in question in the film is definitely a crawl space, not a basement. Also, alligators are terrifying and would totally try to eat you if they’re stressed out and trapped in a small space. With those things addressed, I don’t really have anything negative to say about the movie. There’s the added tension of an adorable dog in the film. I actually wrote in my little review notebook “Oh no there’s a dog” and “OMG the dog” a few times. Her name is Sugar, she looks like a terrier mix, and she spends way too much time in peril. If you don’t think you can handle the stress of not knowing her fate, please go to https://www.doesthedogdie.com/ instead of asking on Facebook or Twitter and spoiling it for others. Additionally, there are also some gory bits in the film- which is to be expected when the bad guys have lots of teeth. It’s not a ridiculous amount of blood or gore, but there’s some broken bones and wounds where you can almost feel the pain radiating off the screen. There’s also a completely terrifying and unnecessary spider scene- but I guess since most of this movie takes place under a house, I’ll let it slide.

Though Crawl is a true action-thriller, it also includes some puns and jokes (University of Florida Gators, takes place in a “Crawl” space), and nods to other monster flicks (I sensed Jurassic Park and Jaws) that I really appreciated. I love it when a movie includes hidden gems for viewers to find. I wasn’t sure if they were written in on purpose, or if I’m overthinking things. But after hearing the greatest end credits music choice OF ALL TIME, I’m kind of leaning towards them being on purpose.

To wrap up, Crawl is the summer movie I really needed. It has everything you could possibly want from this kind of film- action, drama, tension, monsters, relatable characters, magnificent end credits music, and even a cute dog. I think everyone old enough to see an R-rated film should go see it immediately. Then, after you’ve thoroughly enjoyed yourselves, send a huge thank you to Alexandre Aja and both Rasmussen’s for giving us a wonderful break from this Marvel and Disney monopolized year.