Movie Review: Carrie is transformed into a teen movie 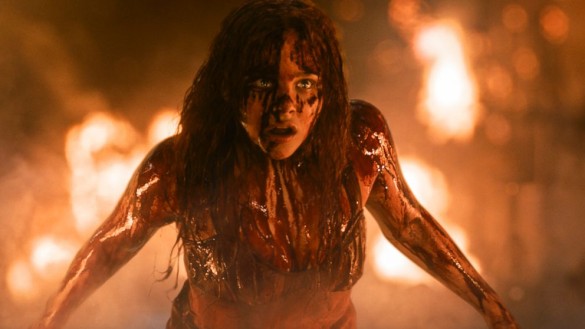 Director: Kimberly Peirce (Boys Don’t Cry)
Writer: Roberto Aguirre-Sacasa and Lawrence D. Cohen
Stars: Chloe Grace Moretz (Kick-Ass, (500) Days of Summer, Let Me In, Hugo) and Julianne Moore (Magnolia, The Big Lebowski, Children of Men)
Synopsis: A reimagining of the classic horror tale about Carrie White, a shy girl outcast by her peers and sheltered by her deeply religious mother, who unleashes telekinetic terror on her small town after being pushed too far at her senior prom.

Kimberly Peirce does an acceptable job of making this movie work. She could’ve done much more to preserve the magic of the 1976 adaptation directed by her close friend Brian De Palma, but supposing she wanted to make her own mark on the character she did fine. Peirce’s Carrie is much more cliche in that she doesn’t seem very different to us than modern horror villains. In fact, it gets a bit ridiculous at times. Scenes involving actors other than Moretz or Moore were tough to watch at times as the cuts Peirce used were pretty atrocious. Other scenes were spot on. It was a strange film from the standpoint of the director in my opinion. Some shots were pretty cool, others were total throwaways. Some missed opportunities, but some added effects. Overall I feel like this movie just never found its rightful place, and Peirce just didn’t feel overly enthused with creating anything special to me.

The script felt very toned down from the novel and the De Palma film which really disappointed me. However, in this day and age of cinema, I can understand why Peirce went for the PG-13 rating. Oh, wait, it’s Rated R? Wow, why not be a little edgier then? I’m not so sure what happened here, but beyond the gratuitous violence scenes toward the end, this felt very boring to me. By simply re-arranging what happened in other versions of the story, Roberto Aguirre-Sacasa and Lawrence D. Cohen did little in the vein of creativity. I felt like this script must have been rushed at some point, because the movie seems to lose focus of who Carrie actually is. Is she an innocent infected by a dark power that takes over, or is she an evil scorn young woman who uses her powers to her advantage to sadistic extremes? The scene post-Prom felt especially out of place considering what Carrie has been through and done up to that point in the film. The ending seemed overloaded with unnecessary plot twists and at the end of the day, this was just another forgettable horror movie. If not for the franchise following, we’d forget about this one pretty quickly. As it stands, whoever takes on this material in the future has a lot of room for improvement over the most recent incarnation.

Chloe Grace Moretz is one of my favorite young actresses. As far as the lead role in Carrie though, she just didn’t have the emotional range at this point in her career. Moretz seems too likable, too empirically beautiful, and most of all too confused on screen as Carrie. At times she seemed to believe that the audience was supposed to empathize with her character, but at others she seemed to play Carrie as evil beyond moments of anger and passion. Even when not comparing her to Sissy Spacek, she still just never felt right for the character from King’s famous novel. Some of the other performances in the film were acceptable, but the only one worth mentioning is Julianne Moore as Margaret White (Carrie’s super-religious mother). Moore seems to give the director what she wanted, and for the most part she was solid. There were times where I felt like her facial expressions felt the same in many different situations–do we really keep the same expression when in a fight for our life that we have at our boring jobs? I just didn’t buy some of it. The supporting roles were very fluffy and didn’t require a lot of heavy lifting, but for the most part they were played just fine. Nothing above average in this whole film to these eyes.

The score here featured a modern indie soundtrack as well as some solid original music from veteran composer Marco Beltrami. Some of the better tracks were provided by artists such as Vampire Weekend, The Civil Wars, and Rogue Wave. While the score was not on par with the 1976 version, it was still a good one and Beltrami added quite a bit to several scenes.

Upon hearing of the new adaptation, King remarked, “The real question is why, when the original was so good?” That really says it all. I am not against remakes, but in this case the new one stole and shrunk great scenes from the original and added little of anything of value. Moretz was a big miscast and I wish we had gotten Lindsay Lohan (she was who King and Spacek both suggested). Bottom line is stay home and watch the old version. You won’t miss a darn thing.