Movie Review: ‘Annabelle Comes Home’ is a decent edition to the Conjuring Universe 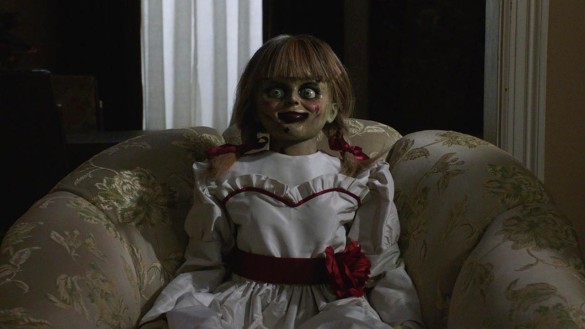 Synopsis: While babysitting the daughter of Ed and Lorraine Warren, a teenager and her friend unknowingly awaken an evil spirit trapped in a doll.

Annabelle Comes Home is the seventh movie in The Conjuring franchise and Annabelle’s third movie as the title villain. It brings back Patrick Wilson and Vera Farmiga as Ed and Lorraine Warren, though they only appear briefly in the film. This movie focuses on their daughter Judy, (played by McKenna Grace) and her babysitter Mary Ellen (Madison Iseman). Unlike other films in the series, Annabelle Comes Home doesn’t have a primary bad guy or a famous haunting it’s based on; it’s a film that features the extent of the Warren’s collection of haunted items and the cases they’ve worked over the years.

The movie opens with the Warrens acquiring the creepy doll from the three friends who gave her the name Annabelle. It’s the same footage used in the first Conjuring movie and in the other Annabelle films. The Warrens run into some trouble trying to drive the doll home, but eventually they get her there and lock her up in a glass box with a big sign that says “Positively Do Not Open”. Some time after, they go out of town on a case or on an extended date night and leave their daughter Judy in the hands of babysitter Mary Ellen. Things happen, Annabelle escapes her protective box, and unleashes a number of spirits and creepy things on the Warren’s house.

The best word I can think of to describe this movie is “fine”. It’s not my favorite film in the series, but it also isn’t the worst. It’s a decent watch, plenty of scary moments, but it wasn’t anything new and exciting. Despite being the third Annabelle movie and the seventh film in this universe, you do not need to watch any of the previous movies to understand the plot or know who the characters are. It definitely helps to have prior “conjuring” knowledge, but it’s not required.

My pick for stand out actor in the film was Mckenna Grace; she plays Judy, the Warren’s young daughter. I’d like them to keep her in the role if they continue to make movies about the Warrens. She replaced Sterling Jerins who portrayed Judy in The Conjuring and The Conjuring 2. The only plot related positive note I had for this film was that they introduced many artifacts, spirits, and cases that could be featured in future spin-offs or sequels. I think they might be leaning towards the Southend Werewolf (yes, that’s a real case the Warrens investigated) because there were a few things in the film that referenced or hinted towards that case. There is also a new entity called The Ferryman, I’m not sure if he’s based on anything the Warrens were involved with or just pulled from mythology, but he would make for an interesting addition to future films. Another bit I liked was they tried to be accurate with some of the details surrounding Annabelle and her journey to her super secure, weekly blessed by a priest, soaked in holy water container at the Warren’s home. The movie even included a cameo by a raggedy-ann doll, which is what the real Annabelle looks like.

Though the film was entertaining enough, I do have some complaints. I’m kind of done with Annabelle. I think she’s had her time as the main bad guy and it’s time to move on to something more interesting and versatile. This movie also relies on a lot of jump scares as the main scare tactic. Like most horror flicks, this one takes place mostly at night and is very dark, and at times, it’s hard to see what’s happening on screen. With all the advances in technology, there has to be a way to make nighttime scenes where the viewer can actually see what’s going on. I was also disappointed that Ed and Lorraine weren’t featured more in the film. I liked that we got to learn more about Judy, but I missed seeing the original duo in action and really want another Conjuring movie instead of a spin-off.

Annabelle Comes Home is a decent edition to the Conjuring Universe, despite its only purpose being a filler film to introduce viewers to new characters. While it’s nothing spectacular, it’s a fun, watchable film that introduces you to the many possibilities for sequels and spin-offs. It’s not the best we’ve seen from these films, but it’s definitely not the worst. All this being said, I’m still interested in seeing what else James Wan and friends can come up with for this franchise.