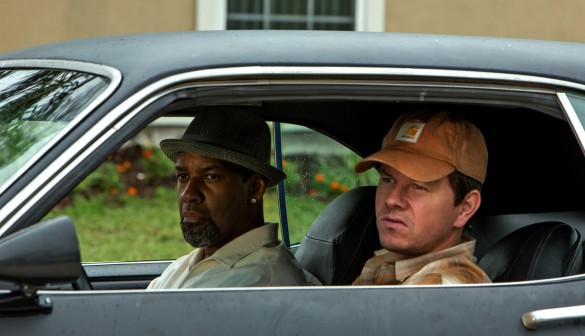 Synopsis: A DEA agent and a naval intelligence officer find themselves on the run after a botched attempt to infiltrate a drug cartel. While fleeing, they learn the secret of their shaky alliance: Neither knew that the other was an undercover agent.

DIRECTION
2 Guns is a perfect example of a movie taking a paint-by-numbers approach; a movie that isn’t bad but isn’t good. It’s generic; it’s all been-there, done-that from the script to the performances to the score. And that all lands on the shoulders of director Baltasar Kormakur, whose last year’s Contraband falls along these same lines. Luckily, he has two very talented actors here in Denzel Washington and Mark Wahlberg who carry the movie and keep it from being a mess. And Kormakur does get a nod for a couple nice shots, particularly one involving time-lapse. But other than that, 2 Guns is one of those movies that’s best reserved to watch on TV on a Thursday night when nothing else is on.

SCRIPT
Not sure if it was just bad source material or just ineptitude but Blake Masters’ first foray into movie screenwriting wasn’t very good. 2 Guns is filled with seen-it-before characters, twists and turns, action beats and a tone that ranges from completely serious to completely goofy. It’s not that it’s bad, it’s just that it’s all things we’ve seen before, multiple times in fact. But perhaps the biggest problem with the script is that we don’t give two craps about any of the characters, from the leads on down. They’re all completely one-dimensional with no backstories and no connection for us to make with them and their decisions.

PERFORMANCES
2 Guns belongs to its two top dogs: Denzel Washington and Mark Wahlberg. Their chemistry, their banter carries the movie, despite them playing characters they’ve already played before. Washington is the straight-laced, hard-nosed DEA agent while Wahlberg is the cocky, smartass Navy officer (he’s basically playing the same role in did in The Other Guys). There’s not much to their performances, but they are good together and are pretty funny. Bill Paxton may give the best performance in the whole movie, as a mysterious (CIA) operative who is completely cheesy and over-the-top with his accent and the way he interviews his subjects. The rest of the big names are pretty much wasted: Paula Patton plays the role of love interest/damsel in distress, Edward James Olmos plays a stereotypical Mexican drug dealer and James Marsden plays a Navy officer. All of these roles could’ve been played by no-name actors and it would’ve been all the same.

SCORE
Like the rest of 2 Guns, Clinton Shorter’s score is pretty generic in a been-there, done-that sort of way. It’s exactly what you’d expect from something in this genre and doesn’t offer anything new. It doesn’t add anything to movie — in fact it isn’t used that much, which is a plus I guess. While the score wasn’t anything to brag about, the song “Two Against One” by Danger Mouse featuring Jack White was nice to hear.