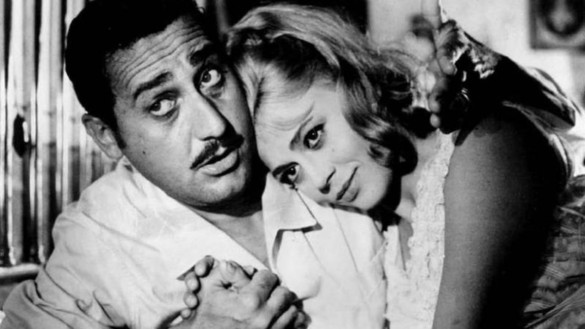 Commedia all’italiana, or as translated as “Comedy in the Italian way,” was the new genre Italian cinema developed following the Neorealism period in the years right after the war. From the late 50s to the end of the 70s, Italian directors used their new freedom to tap into areas once forbidden by the dictatorship and the Catholic Church that was under the iron grip. Federico Fellini used elements of the Commedia in his works during the period, but the real handlers were Mario Monicelli, Dino Risi, Pietro Germi, and legendary neorealist Vittorio De Seca. These are reflective in Italian culture, set around the disillusioned and poor in dire circumstances, characters who are cheap, can be easily deceived, or just plain stupid, and with a finale where the characters are back to where they started, or are in a false sense of hope. The slate of films touch upon contemporary and historical matters where nothing is immune to getting prodded at.

Divorce was not legalized in Italy until 1970, but with the subject of mistresses and finding love outside of marriage, it was a topic full of conceptions and loopholes. Divorce, Italian Style is a masterpiece of the genre, mocking the act of one who finds their spouse in the act of committing adultery and kills them in a crime of passion, which would be a lesser jail sentence because it was the killer reclaiming their honor. Here, Marcello Mastroianni plays a man who falls in love with his young, attractive cousin but is married to an ugly woman, and fantasizes about how to kill her. He decides to get find someone who can seduce his wife so he can actually kill her in retaliation, freeing him to marry his cousin. Director Germi won an Oscar for his screenplay, one of the few for a foreign film, and would follow it with Seduced And Abandoned. In a small Sicilian town, a woman sleeps with her sister’s fiancé and feels bad for doing so. When her parents find out, she is forced to marry the fiancee in an act of matrimonio riparatore, marriage rehabilitation, something part of Sicilian customs.

Vittorio De Secca would win another Oscar, shifting from the streets of rebuilding Rome in the 40s to the comedies about love in the 60s with Yesterday, Today, and Tomorrow. Mastroianni and the legendary Sophia Loren played three different couples in three different scenarios as working-class, wealthy, and prostitute & client. It explores the connections and the fallacies people in each scenario have to face to what defines as love. Later on, director Lina Wertmüller explored love under isolation from the world in Swept Away, a story about a wealthy woman and a Communist boatman on a desert island, totally different in every category, falling in love and discovering the parts missing in their lives. Yes, that is the Madonna-Guy Ritchie movie that also remade the film, but part of that film’s failure is the style of comedy that could not be translated from its original form.

Italy is known for the Mafia. There is also an underworld of criminality untied to organized crime, but criminals know each other well. A film that kicked off the Commedia all’italiana era was 1958’s Big Deal on Madonna Street, featuring Mastroianni (note the roles and directors he worked with), Vittorio Gassman, Carlo Pisacane, and arguably the most famous comedian from Italian entertainment, Antonio De Curtis, or known by his stage name Toto. Here, a gang of crooks, all who have served time for petty crimes, plan a jewelry heist which breaks apart slowly by ineptness and unplanned challenges. It was remade twice in Hollywood as Crackers (by Louis Malle) and Welcome To Colinwood (by the Russo brothers).

1962’s Mafioso is another crime comedy about a naive factory manager who visits his home in Sicily only to be drawn in to do a hit for the local Mafia. Like a comedy of errors and to sneak into the United States, this poor guy is asked to do it as a favor and because no one will suspect him, even though he’s never held a gun in his life. Vittorio Gassman also played Il mattatore, “The Showman,” as an actor who goes to jail for fraud – the only one to go out of a group who took part in it – and is introduced to prison life.

While Francesco Rosi took direct aim at the establishment over corruption and lies in dramatic fashion, others followed the path of Charlie Chaplin’s The Great Dictator. In March on Rome, director Dino Risi follows two members of the Blackshirts following Il Duce to the capital. Recently joined the fascists, one is a believer, the other is an opportunist, but both see and comment on the odd behavior by fasicst officials while also trying to get away from them. The Boom by De Secca satirizes the economic growth Italy experienced in the 50s and 60s that does not take everyone under its wing and one person is caught up in it in debt while living a very high standard of life. To mock the planned coup led by a fascist in 1970, We Want the Colonels, directed by Monicelli and starring the notable Ugo Tognazzi, who also starred in March on Rome, poked fun at the fanatics who still admired Il Duce and the stupidity that led to the coup getting uncovered by the press, not the police.

Italian cinema also dove into sex comedies that were not afraid to show nudity and slapstick. As censorship dwindled and color film became the norm in the 1970s, these films were released to expose the really sexual anti-morals of the time, such as in ll merlo maschio, Secret Fantasy in the U.S. It presented voyuerism and exhibisionism in a positive light, differing from pornography as using nudity not for pleasure, but for entertainment. Pier Paolo Passolini’s “Trilogy of Life” all had scenes of nudity and sex-related plots, including the emphasis of eroticism in his adaptation of Arabian Nights. French actress Edwige Fenech became widely known for several sex comedies which Quentin Tarantino became a fan of (a character in Inglourious Basterds is named Lt. Ed Fenech); Anna Maria Rizzoli was a glamour model who starred in several films in the late 70s and early 80s, and many male comedians including Lino Banfi and Pippo Franco played a role in establishing the Italian sex comedy. If you can understand Italian or don’t mind not understanding it, you can watch above ll merlo maschio.